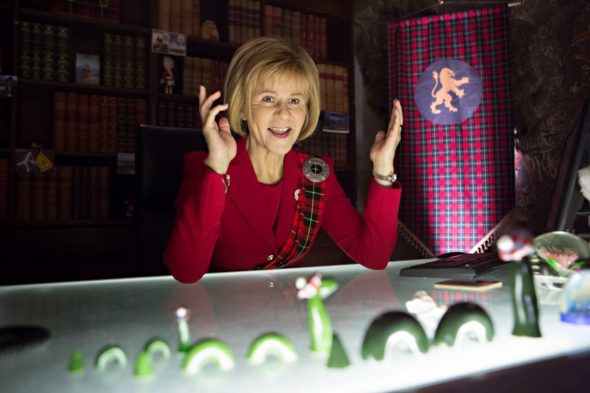 TV show description:
A British sketch comedy series, Tracey Ullman’s Show features the actress, comedian, and singer starring as a variety of people, from the everyday, to the rich and famous, and even the infamous. In UK, the program premiered on BBC One, on January 11, 2016.

While providing a peek at life on the other side of the pond, Ullman portrays real-life luminaries, including Dame Judi Dench, Dame Maggie Smith, Jerry Hall, and Adele, as well as political figures like German chancellor Angela Merkel and Camilla, Duchess of Cornwall (i.e. Camilla Parker Bowles).

Series Finale:
Episode #18
Angela Merkel tries to keep President Trump’s attention during a video chat; an actress is encouraged to make her award-show appearance mean something; the chair of Public Works gets proactive about potentially offensive statues in London; pollsters turn to new techniques during tricky times; Theresa May preps for a Halloween party.
First aired: November 3, 2018.

What do you think? Do you like the Tracey Ullman’s Show TV series? Should this TV show have been cancelled or renewed for a third season on HBO?