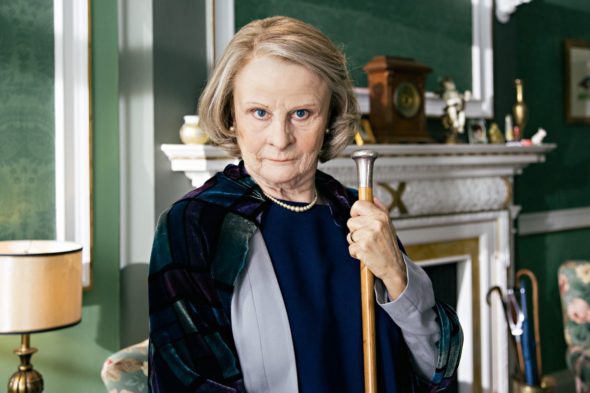 A British sketch comedy on the HBO premium channel, Tracey Ullman’s Show features the actress, comedian, and singer starring as a variety of people, from the everyday, to the rich, famous, and even the infamous. While providing a peek at life on the other side of the pond, Ullman portrays real life luminaries, including Dame Judi Dench, Dame Maggie Smith, Jerry Hall, and Adele, as well as political figures like German chancellor Angela Merkel and Camilla, Duchess of Cornwall (i.e. Camilla Parker Bowles).

Because this is a BBC One TV show, it’s not totally up to HBO whether to cancel or renew Tracey Ullman’s Show for season three. The BBC hasn’t yet made a decision on commissioning a third season though, so HBO’s interest in future installments may influence them.  The ratings are up when compared to season one so that’s a good sign. For now, I’ll keep an eye on the Nielsen ratings and update this page from time to time. Subscribe for free updates on any Tracey Ullman’s Show cancellation or renewal news.

8/30/18 update: HBO has renewed this program for a third season. Details here.

What do you think? Are you glad that Tracey Ullman’s Show has been renewed for a third season? How would you feel if HBO had cancelled this TV series, instead?

I think it should be renewed. Tracey is a treasure and we need more of her always ! Pete Yorn