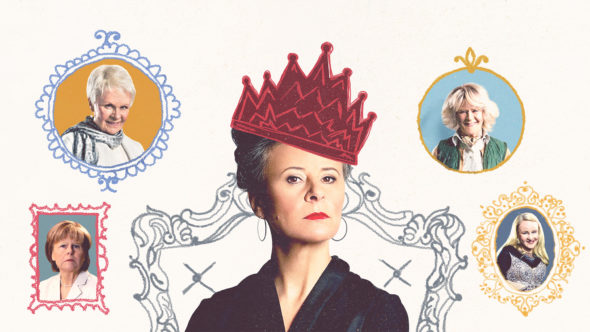 Last season Tracey Ullman’s Show on HBO ranked the bottom half of the pay cable network’s programming, but its ratings were up over the freshman season by almost 12% in the demo and 26% in terms of total audience size. Since HBO cares about subscribers rather than advertisers, the second number is more telling. Either way the series, which originates on BBC One, did well enough to score a third season stateside. How will it fare this time around? Will Tracey Ullman’s Show be cancelled or renewed for season four on HBO? Stay tuned.

A British sketch comedy, Tracey Ullman’s Show features the actress, comedian, and singer starring as a variety of people, from the everyday, to the rich, famous, and even the infamous. While providing a peek at life on the other side of the pond, Ullman portrays real-life luminaries, including Dame Judi Dench, Jerry Hall, and Adele, as well as political figures like German Chancellor Angela Merkel and Camilla, Duchess of Cornwall (i.e. Camilla Parker Bowles). In season three, Ullman is introducing new characters, including British Prime Minister Theresa May, French First Lady Brigitte Macron and U.S. First Lady Melania Trump.

For comparisons: The second season of Tracey Ullman’s Show on HBO averaged a 0.11 rating in the 18-49 year old viewer demographic and 440,000 viewers.

What do you think? Do you like the Tracey Ullman’s Show TV series? Should this HBO TV show be cancelled or renewed for a fourth season?