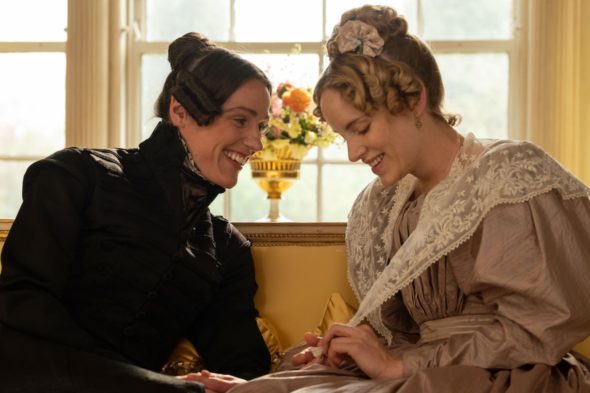 With Game of Thrones ending, HBO is on the hunt for its next big thing. Enter the Gentleman Jack TV show. While this new HBO TV series is a British-American period piece, which might not seem like a ratings-buster at first blush, Downton Abbey took the world by storm, and it was on public television in the US. Will the first season draw in enough viewers to earn a return? Will Gentleman Jack be cancelled or renewed for season two? Stay tuned. *Status update below.

An HBO historical drama, inspired by the real Anne Lister’s life, Gentleman Jack stars Suranne Jones, Sophie Rundle, Gemma Whelan, Timothy West, and Gemma Jones. Drawing upon her copious diary entries, the series centers on Lister (Jones), who sets out to shore up Shibden Hall, her West Yorkshire family estate, by reopening the local Halifax coal mine and marrying well. The twist is, Lister does not intend to marry a man.

What do you think? Do you like Gentleman Jack TV series on HBO? Would you watch a second season of this TV show?

*5/23/19 update: HBO has renewed Gentleman Jack for a second season.

Love the show “Gentleman Jack” and would love to see a second season! The acting, costumes, & historical pieces are perfect! Can’t wait to see the show again❣️

WOW! This show is phenomenal! The writer definitely did her thing! The production, the cast, everything about this show and those involved in the making are the reason Ann Listers story keeps you on your feet, and stuck wanting more and more! This women was absolutely extraordinary! Women like her back in her day had struggles more then us women today… it’s beautiful to see the courage and strength she had to face the chauvinistic ways she was brought up in. I’ve never heard of this women before until YouTube! Which in turn brought me to HBO… and of course… Read more »

I have watched the entire US HBO offering and again and again On Demand. It is remarkable! The cast is amazing. Love, love, love this show and can’t wait for season two!!

This show is very well put together. The writing, the acting, the story telling. I love everything about this show. Too bad they only sampled 18-49 age group. My friends and I are above the age of 50 and absolutely love the show. I would be heartbroken if there were not a season 2.

OMG IF YOU HAVEN’T WATCH THIS SHOW YET YOU BETTER BECAUSE THIS IS HANDS DOWN ABSOLUTELY THE BEST SHOW I’VE EVER SEEN! There’s Never Been Any Other Show That Can Even Come Close To Gentleman Jack!!!! This Has Everything That ANYONE Would OR Could WANT This Is The Best Documentary Of Anne Lister That Gives Her Praise For Her Just Being Her That She Finally Received Which Probably Most People From Back Then Would Disagree With Anne Receiving Praise For Her Wonderful Mind, Courage And For Not Changing Who She Was For Anyone Which Was Absolutely Unthinkable Back Then. So… Read more »

Exceptional production all around. The writing and acting are top notch. I stumbled on it accidentally and so glad I did. I didn’t see much promotion for it. This show is Emmy worthy!

I’d have been heartbroken if it wasn’t renewed!!

OMG, so sad they are depending on ages 18-49. I’m willing to bet this show will have a HUGE audience in Over-50. We’ve been so starved, for so long, for a great series that isn’t just a gratuitous skin show. My friends are going NUTS for GJ—but they won’t be counted as counting.

I’m 63 and I love it. Never watch things more than once. But this. Every time I understand it more and getting to watch all this abundance.