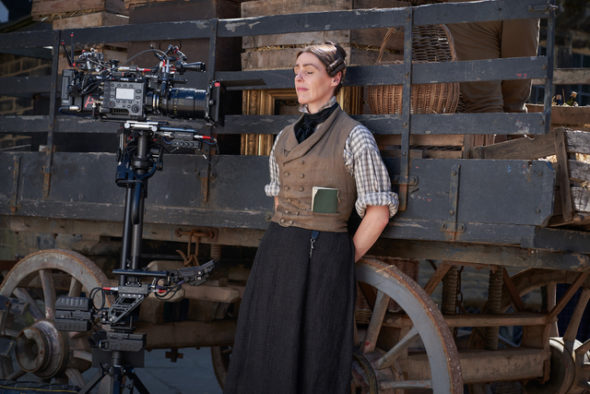 Will this series have a happy ending? Has the Gentleman Jack TV show been cancelled or renewed for a third season on HBO and BBC One? The television vulture is watching all the latest cancellation and renewal news, so this page is the place to track the status of Gentleman Jack, season three. Bookmark it, or subscribe for the latest updates. Remember, the television vulture is watching your shows. Are you?

Airing on BBC One in the UK and the HBO cable channel in the United States, the Gentleman Jack TV show stars Suranne Jones, Sophie Rundle, Timothy West, Jodhi May, Katherine Kelly, Derek Riddell, Gemma Jones, Stephanie Cole, Peter Davison, Amelia Bullmore, Vincent Franklin, Shaun Dooley, Rosie Cavaliero, Joe Armstrong, Anthony Flanagan, and George Costigan. Drawing upon the real Anne Lister’s copious diary entries (part of which were written in code), the story centers on Anne (Suranne Jones), a landowner and industrialist. She sets out to shore up Shibden Hall, her West Yorkshire family estate, by reopening the local Halifax coal mine and marrying well. The twist is, Anne does not intend to marry a man. In season two, it’s 1832 and all eyes are on Anne Lister and Ann Walker (Rundle) as they set up home together at Shibden Hall as wife and wife, determined to combine their estates and become a power couple. Anne’s entrepreneurial spirit frightens the locals as much as her unconventional love life and, with Halifax on the brink of revolution, her refusal to keep a low profile becomes provocative and dangerous.

On HBO, the second season of Gentleman Jack averages a 0.01 rating in the 18-49 demographic and 88,000 viewers in the live+same day ratings (includes all DVR playback through 3:00 AM). Compared to season one (which aired in 2019), that’s down by 93% in the demo and down by 78% in viewership. While these numbers don’t include further delayed or streaming viewing, they are a very good indicator of how a show is performing, especially when compared to others on the same channel. Though other economic factors are involved, the higher-rated shows usually get renewed and the lower-rated ones get cancelled. Find out how Gentleman Jack stacks up against other HBO TV shows.

Will HBO cancel or renew Gentleman Jack for season three? The series is a co-production with BBC One in the UK so that helps reduce the cost. The traditional ratings are very low but, since HBO is airing it on Monday nights, the cable channel wasn’t expecting much anyway. Despite the numbers, I think there’s still a chance that it will be renewed but it’s much more likely to be cancelled. I’ll update this page with breaking developments. Subscribe for free alerts on Gentleman Jack cancellation or renewal news.

What do you think? Do you hope that the Gentleman Jack TV show will be renewed for a third season? How would you feel if HBO and BBC One cancelled this TV series, instead?