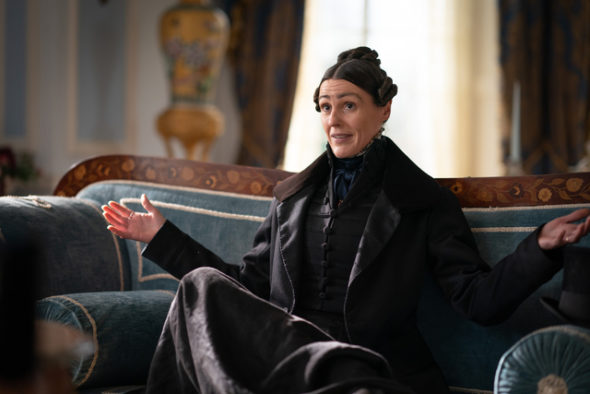 The story of Anne Lister won’t continue on BBC One and HBO. The outlets have cancelled the Gentleman Jack program so there won’t be a third season. Season two finished airing in the United States on June 13th.

A period drama series, the Gentleman Jack TV show stars Suranne Jones, Timothy West, Jodhi May, Katherine Kelly, Derek Riddell, Stephanie Cole, Peter Davison, Amelia Bullmore, Vincent Franklin, Shaun Dooley, Rosie Cavaliero, Joe Armstrong, Anthony Flanagan, and George Costigan. Drawing upon the real Anne Lister’s copious diary entries (part of which were written in code), the story centers on Anne (Jones), a landowner and industrialist. She sets out to shore up Shibden Hall, her West Yorkshire family estate, by reopening the local Halifax coal mine and marrying well. The twist is, Anne does not intend to marry a man. In season two, it’s 1832 and all eyes are on Anne Lister and Ann Walker (Rundle) as they set up home together at Shibden Hall as wife and wife, determined to combine their estates and become a power couple. Anne’s entrepreneurial spirit frightens the locals as much as her unconventional love life and, with Halifax on the brink of revolution, her refusal to keep a low profile becomes provocative and dangerous.

On HBO, the second season of Gentleman Jack averaged a 0.01 rating in the 18-49 demographic and 92,000 viewers in the live+same day ratings (includes all DVR playback through 3:00 AM). Compared to season one (which aired in 2019), that’s down by 93% in the demo and down by 76% in viewership. It surely didn’t help that there were three years between seasons and that the sophomore season aired on Mondays, a night that’s watched by far fewer HBO subscribers.

“HBO will not be moving forward with a third season of Gentleman Jack,” the cable channel said in a statement to Deadline. “When we began this journey more than five years ago, we knew the series’ creator Sally Wainwright had a uniquely compelling vision, and it’s been tremendously gratifying to see how Anne Lister’s journey has resonated with viewers. We are incredibly grateful to Sally, to the impeccable Suranne Jones and Sophie Rundle, and to the entire cast and crew for bringing Anne and Ann’s story to life. We’d also like to thank our partners at BBC and Lookout Point for their collaboration on two remarkable seasons.”

Here are some reactions to the cancellation:

What do you think? Have you watched the Gentleman Jack TV series on HBO or BBC One? Are you disappointed that it wasn’t renewed for a third season?

TV content producers used to take the hit for a quality, intelligent, prestige show knowing that it might not be their highest rated or highest revenue generator, but they kept that program on the air because they valued what the medium could achieve. They didn’t play to the lowest common denominator with superheroes and reality shows ad nauseam. Gentleman Jack had two of Britain’s top actresses. Sophie Rundle and Suranne Jones, the rest of the cast was stellar as well, an award-winning script writer, outstanding directors, an amazing group of designers and a totally unique and innovative story never before… Read more »

I am really disappointed that Gentleman Jack will not have a season 3. Everything about the show was brilliant. All the actors are superb. The costumes and locations wonderful. The best show on tv for many years!

Good show, although the real Anne Lister died not long after the events of both seasons, so more than one more season would have been pushing it.
Honestly, I’d be interested in a prequel to see how the young Anne became the formidable Gentleman Jack.

Such a terrible disappointment. I for one found the show highly entertaining and informative. We the viewers have been left hanging once again just when the decisions of Ms. Walker and Ms. Lister were coming to light. I can only be grateful that the story is based upon real people and I will have the option of going to my library to find a book or two that will answer my questions as to what happened in their world and how they finished their lives.

I am devastated! What a fantastic show, acting was superb, the story is awesome, i so want the show to continue, why do we constantly have to watch tripe reality shows being made and funded, dumbed down tv. Please reconsider and promote it widely so people are aware of it. Suranne Jonss is fantastic as GJ and the whole cast and crew are tremendous, i am going to miss it immensel but live in hope that HBO or the BBC will reconsider. Truly gutted

I was very disappointed when I heard the news…it was such a well-made show, and was delightfully different from so many of the other period dramas.

(I notice that someone has gone and given a thumbs down to each comment that expressed a similar disappointment….why? How about coming out of the shadows and posting your own comment, so we can see what you based your thumbs down reaction on?)

Well done HBO. Just get through Pride Month & then cancel ‘Gentleman Jack’.Such a great cast & such a good script. You set this show up to fail by showing it on a ‘dead’ night of the week & by not promoting it. Let’s hope another backer steps in.

Noooo! This is such a great show!