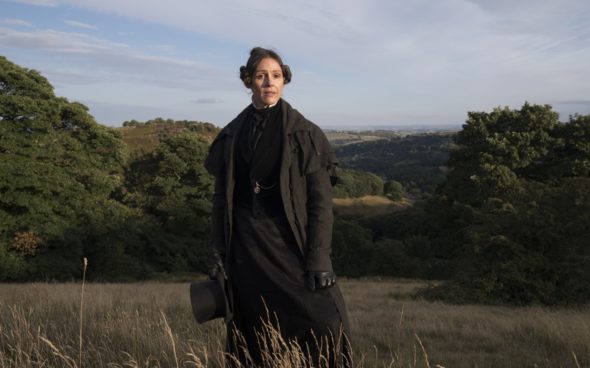 TV show description:
From creator Sally Wainwright, the Gentleman Jack TV show is a British-American historical drama, set in the 1800s. The story kicks off in 1832, in the West Yorkshire town of Halifax, and centers on unmarried landowner Anne Lister (Suranne Jones).

By the final decade of the industrial revolution, Shibden Hall has seen better days. Still, Anne loves her ancestral home, and decides to restore it, by reopening the local coal mine and marrying someone who can help her achieve her goal.

There’s one catch. This charming, dapper woman has no plans to marry a man.

As her sister, Marian (Whelan) worries that Anne’s peculiarities will have a negative impact on the family and their estate. Anne’s behavior hasn’t escaped the notice of her father, Jeremy (West), either.

Anne hones in on Ann Walker (Rundle), a well-to-do single woman. She has both the money necessary to prop up Shibden Hall and natural beauty.

Inspired by the real Anne Lister’s life, the series draws upon her copious diary entries, which were obscured by a secret code. It delves into the life of a passionate woman, with a keen business mind, and little patience for societal conventions.

What do you think? Do you like the Gentleman Jack TV series? Should this HBO TV show be cancelled or renewed for another season?

I love it ! I would like all the episodes Sally can write. RENEW !

And all the cast ! Suranne Jones, is excellent !

Expertly done in every way–acting, script, direction, set, costuming, music–Gentleman Jack is quickly becoming a beloved go-to among lesbians everywhere, as well as a fascinating period drama with genuine appeal for straight film afficionados. At 73, I’ve never seen so powerful and positive portrayal of lesbians, one that leaves the old death-by-lesbianism film trope dying in the dust. I guess I’ve watched it 18 times now, not only because of its excellence, but because Wainwright and Jones go deeply inside Anne Lister and come out with a narrative that describes the inner lives, if not the literal lives, of many… Read more »

I was left wondering at the end of season 1, hoping for a season 2 to resolve what happens with the mine situation, and if the 2 brother bankers will get their due. Hooray for having season 2.

Eye candy, acting is brilliant. Casting is point on. I have binged 2 days. Its going to be difficult to find something to match “Gentleman Jack” until next season. I guess I will have to read a book about Ann Lister. Loved this series.

Gentleman Jack delivers an intellectually strong, persistence that viewers have been craving & that every man, woman & child aspire to be. While fluidly grasping the current fashion, set by whichever country she has just finished visiting, she’s still able to return home to take on the tasks seen as unorthodox for a woman to do. She holds a room, humbly yet firmly, demands a firm respect deserved to her elders and those that are due to receive such respect. Combined w the hearty daily tasks and responsibilities that a landowner could possibly face, she tackles cultural, political & religious… Read more »

I LOVE THIS SHOW! Please renew it for another season – It’s great writing/acting/production value!