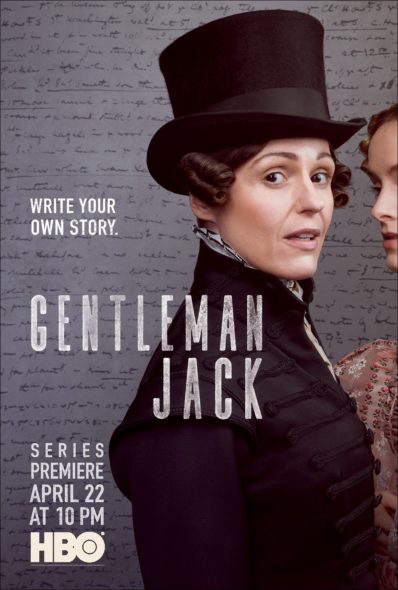 Are you charmed by the first season of the Gentleman Jack TV show on HBO? As we all know, the Nielsen ratings typically play a big role in determining whether a TV show like Gentleman Jack is cancelled or renewed for season two. Unfortunately, most of us do not live in Nielsen households. Because many viewers feel frustration when their viewing habits and opinions aren’t considered, we’d like to offer you the chance to rate all of the Gentleman Jack season one episodes here. *Status update below.

An HBO historical drama inspired by the real Anne Lister’s life, Gentleman Jack stars Suranne Jones, Sophie Rundle, Gemma Whelan, Timothy West, and Gemma Jones. Drawing upon her copious diary entries, the series centers on Lister (Suranne Jones), who sets out to shore up Shibden Hall, her West Yorkshire family estate, by reopening the local Halifax coal mine and marrying well. The twist is, Lister does not intend to marry a man.

What do you think? Which season one episodes of the Gentleman Jack TV series do you rate as wonderful, terrible, or somewhere between? Should HBO cancel or renew Gentleman Jack for a second season? Don’t forget to vote, and share your thoughts, below.

*5/23/19 update: HBO has renewed Gentleman Jack for a second season.

Gentleman Jack is by miles the best series I have watched absolutely everything is spot on.
The casting.
The plot
The timing of the actors
The music
The common sense of it all
And the sensitivity
So human in every way

Incredibly well done in every possible way. And Gritty.

There should have been more wide spread advertising for Gentleman Jack on other channels and in magazines. Especially since this was a combined production. No one I spoke with had heard of it.

Absolutely love it. Hope to see season 2. Watched the whole series twice already. This is a hit!

I just discovered it today and my mother and I watched 3 episodes in a row. We love it!

renew, renew, renew…… I can not imagine there would even be a doubt, this is a winner!

Gentleman Jack is an excellent movie. The actors are especially gifted. It would be ashame to end this series now. The history of prejudice must come to light.
The dialogue is art coupled with the talent of the actors. The film is a beautiful and scenic
Film. Please keep it.

This show is amazing!!! The story is so relevant to today’s times. The lead actress is awesome!! This show is a keeper. I love period pieces, too. Ten stars is my vote!!

LOVE IT THE LEAD GIRLS A GREAT ACTRESS ITS DIFFERENT I WANT SEASON 2 AND AND….MORE. I LOVE THE MUSIC IN IT AND THE SCENERY.

I loved it! Gorgeous sweeping landscapes and especially loved young Thomas Sowden played by Tom Lewis – such a kind heart giving away that toy soldier!