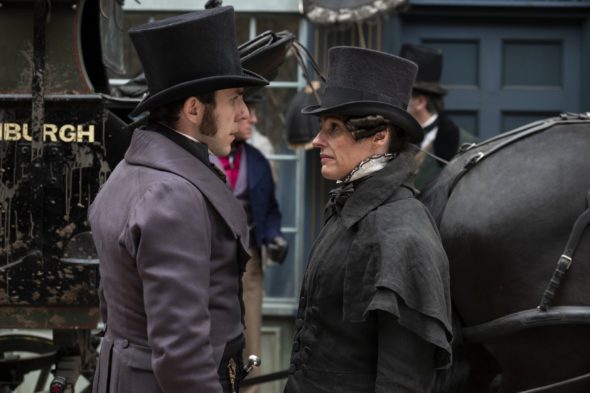 Will Anne Lister be back for more? Has the Gentleman Jack TV show been cancelled or renewed for a second season on HBO? The television vulture is watching all the latest cancellation and renewal news, so this page is the place to track the status of Gentleman Jack season two. Bookmark it, or subscribe for the latest updates. Remember, the television vulture is watching your shows. Are you?

An HBO historical drama, inspired by the real Anne Lister’s life, Gentleman Jack stars Suranne Jones, Sophie Rundle, Gemma Whelan, Timothy West, and Gemma Jones. Drawing upon her copious diary entries, the series centers on Lister (Suranne Jones), who sets out to shore up Shibden Hall, her West Yorkshire family estate, by reopening the local Halifax coal mine and marrying well. The twist is, Lister does not intend to marry a man.

The first season of Gentleman Jack averaged a 0.09 rating in the 18-49 demographic and 392,000 viewers. Learn how Gentleman Jack stacks up against the other HBO TV shows.

Will HBO cancel or renew Gentleman Jack for season two? The ratings have been okay so I’m leaning toward a renewal. I’ll keep a hungry eye on the Nielsens and update this page with breaking developments. Subscribe for free Gentleman Jack cancellation or renewal alerts.

5/23/19 update: HBO has renewed Gentleman Jack for a second season.

What do you think? Are you glad that the Gentleman Jack TV show has been be renewed for a second season? How would you feel if HBO had cancelled this TV series, instead?

I love Gentleman Jack. The casting of Suranne Jones and Sophie Rundle was brilliant. I think the series would have done much better in the ratings if the show had been promoted. Most people watching it came on it by accident or were told about it.

Please renew this series!There’s so much to tell about Anne Lister!I give 5 stars to this show!

Please renew this series!There is so much to share and tell about Ann Lister,and the first season is so intriguing and touching,I hope to see more seasons about Anne Lister!I give this show 5 stars!

I did- do not cancel gentleman jack. It is an excellent show, and timely.

I have absolutely loved the first season so far! I’m really hoping for a renewal for this great show.

Loved gentlemen jack. It was a great show would love to see more of it excellent performance and writing .i give it a 5 star rating.loved the story .

I loved it i want to see the 2 nd season i really love Ann Lester the shes my kind of gal.if i were her girl i would never say no.And she was such a strong willed person just like me.speaks with authority which is also like me.most of all i love her because of what she stood for ( womens rights ) love the women who wrote the true story about Ann and her way of life and how she stood upbagainst men and society and really didnt care how others think of her.what a wonderful story loved it… Read more »