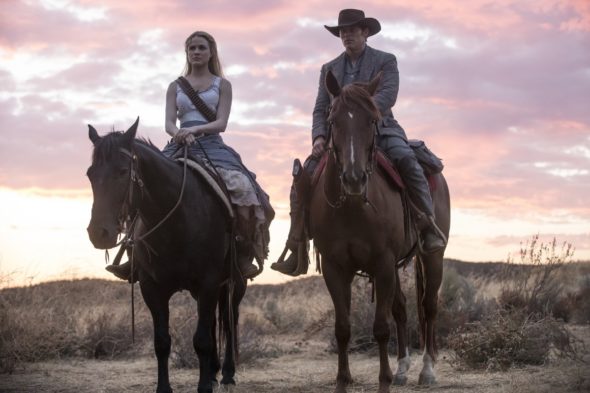 What’s going on in the Wild West “town” of Sweetwater? Has the Westworld TV show been cancelled or renewed for a third season on HBO? The television vulture is watching all the latest cancellation and renewal news, so this page is the place to track the status of Westworld, season three. Bookmark it, or subscribe for the latest updates. Remember, the television vulture is watching your shows. Are you?

The western thriller unfolds in a pricey, futuristic theme park, where visitors pay to act out their Wild West fantasies while interacting with lifelike robot “hosts.” In the first season, some of the recently re-coded hosts started exhibiting aberrant behavior. Season two further delves into the dawn of artificial consciousness and the birth of a new form of life on Earth.

The second season of Westworld averaged a 0.61 rating in the 18-49 demographic and 1.57 million viewers. Compared to season one, that’s down by 24% in the demo and down by 14% in viewers. Learn how Westworld stacks up against the other HBO TV shows.

Will HBO cancel or renew Westworld for season three? The numbers (and buzz) are very good for an HBO series. I have no doubt that it will be renewed for a third season. Since that’s merely speculation though, I’ll keep a hungry eye on the Nielsens and update this page with breaking developments. Subscribe for free Westworld cancellation or renewal alerts.

5/1/2018 status update: Westworld has been renewed for season three on HBO. Details here.

What do you think? Do you hope the Westworld TV show will be renewed for season three? How would you feel if HBO cancelled this TV series, instead?

So let me get this straight; you put on the chopping block great shows like Scorpion, Timeless, The Alienist and The Librarians that had history, science and math and kept shows like Mama June From Not to Hot and other Reality shows showing people *****, whine and be caddy against each other so the networks can get ratings and society can get their “Peeping Tom on!” I thinking about canceling my cable and switching to Netflix and Hulu.