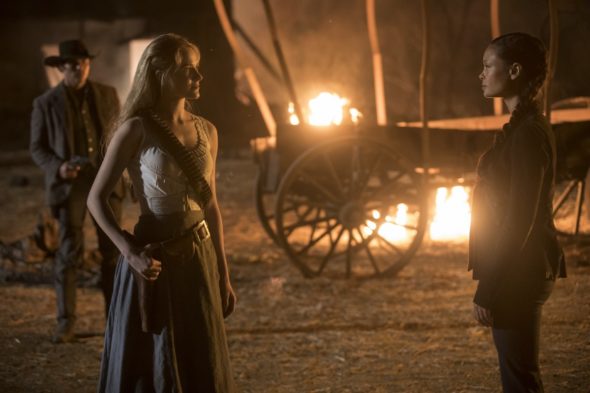 It looks like pay parity for Thandie Newton and Evan Rachel Wood just got real. HBO has confirmed it has renewed its Westworld TV show for a third season, with a start date TBD. Newton and Wood negotiated for pay equal to that of their male counterparts on the HBO series, prior to Westworld‘s season three renewal.

Check out this HBO press release on the season three renewal of Westworld.

“It’s been an extraordinary pleasure to work with the exceptionally talented Jonathan Nolan and Lisa Joy, as well as their gifted cast and crew,” noted Bloys. “From the inspired storytelling to the incredible visuals, we are so excited to see where the next chapter will take us.”

WESTWORLD returned for its ten-episode second season Sunday, April 22. A dark odyssey about the dawn of artificial consciousness and the birth of a new form of life on Earth, the show was created for television by Jonathan Nolan & Lisa Joy, who are also executive producers. The show debuted on HBO in Oct. 2016 to become the network’s most-watched freshman series ever.

Time called WESTWORLD “one of the biggest shows on earth,” while Entertainment Weekly hailed the show as “brilliant” and “enthralling.” Newsday termed it “explosive,” “smart” and “engaging,” while Salon cited the “outstanding performances” and the Hollywood Reporter called the series “thrilling” and “massively entertaining.”

What do you think? Are you a fan of the Westworld TV series? Do you plan to watch season three on HBO? Let us know, below.

The second season is stupid. It doesn’t make sense. WHy humans get so weak. Why is a female robot leading, not male. Why they go around all the time

Loved the first season but Second season was disappointing to say the least. Stopped watching after 4 episodes. Too bad because the acting is top notch, yet the story line was a let down.

This is an amazing series! It is an intelligent, well crafted puzzle-mix. The past, present and future comes at you like a barrage of bullets every episode. Is it a dream or a past life? Is it reality or is it the narrative programming? Hundreds of bits of information coming at you in context, out of context, but don’t look away or dismiss something as irrelevant, for it’ll surely pop up again 2 or 3 episodes later. This is not a series to take in casually. You must be diligent and be involved. Watching episodes 2 or 3 times is… Read more »

I can’t remember ever being so disappointed in a second season. I loved the first season but the second season has lost all its magic. After two episodes I am done. There are far too many shows to watch to watch a show that has become a choir to watch.

One man’s meat is another man’s poison. I finally gave up watching live and crap scheduled mainstream channel TV a couple of years ago I now only watch films, wildlife documentaries and quality “box set” series on MY schedule. There have been so many wonderful series over the years but, for me, Westworld is already right up there with the best. It has an amazing cast, some of the acting has been incredible, especially from Louis Herthum. The plot lines continually flumax, intrigue and delight and frequently have me rewinding or replaying entire episodes. Lastly, the Utah scenery is truly… Read more »