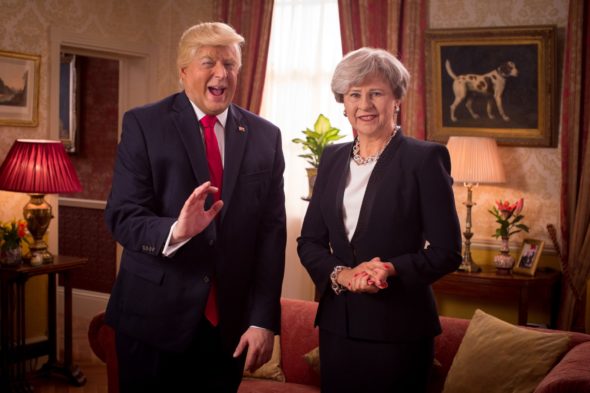 A British sketch comedy on the HBO premium channel, Tracey Ullman’s Show features the actress, comedian, and singer starring as a variety of people, from the everyday, to the rich, famous, and even the infamous. While providing a peek at life on the other side of the pond, Ullman portrays real life luminaries, including Dame Judi Dench, Dame Maggie Smith, Jerry Hall, and Adele, as well as political figures like German chancellor Angela Merkel and Camilla, Duchess of Cornwall (i.e. Camilla Parker Bowles). In season three, Ullman is introducing new characters, including British Prime Minister Theresa May, French First Lady Brigitte Macron and U.S. First Lady Melania Trump.

Because this is a BBC One TV show, it’s not entirely up to HBO whether to cancel or renew Tracey Ullman’s Show for season four. The BBC hasn’t yet made a decision on commissioning a fourth season though, so HBO’s interest in future installments may influence them. Last year, the ratings improved over the freshman season, so let’s see how it does this time around. For now, I’ll keep an eye on the Nielsen ratings and update this page from time to time. Subscribe for free updates on any Tracey Ullman’s Show cancellation or renewal news.

What do you think? Should the Tracey Ullman’s Show TV series be cancelled or renewed for a fourth season on HBO?

We await more Tracy Ullman PLEASE!!!! I am dyin’ over here. Love the show.

Please renew! We need another season to help us get thru this miserable period in US history.

I BEG HBO, BBC to renew Tracey Ullman SHow with all the political Brexit, Boris Johnson snd Trump likenesses, Trump’s faux pas’ during just visit with the Queen–ITS SURE to be a hit!!!!