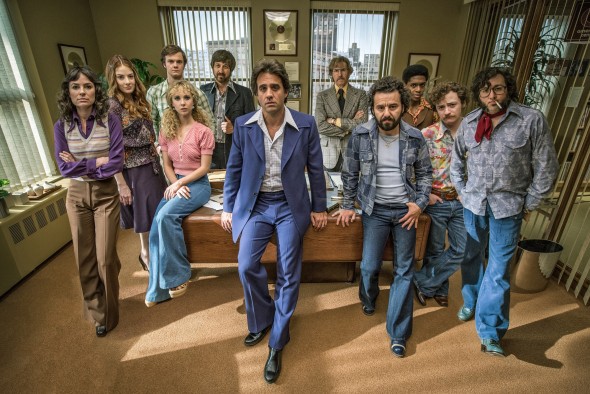 The drama is set in New York in the 1970s and revolves around the music business of that era — a time of sex and drugs, at the dawn of punk, disco, and hip-hop. The cast includes Bobby Cannavale, Olivia Wilde, Ray Romano, Ato Essandoh, Max Casella, P.J. Byrne, J.C. MacKenzie, Birgitte Hjort Sørensen, and Juno Temple. The series was cancelled by HBO in 2016 after one season.

At the 2018 Rome Film Festival, Scorsese revealed he thinks Vinyl wasn’t successful because he didn’t direct every episode:

“It was ultimately tragic for me because we tried for one year. I did the pilot. We tried for one year with HBO, but we couldn’t get the creative elements together. It was something that I realized, in order to make it right … I think I would have had to direct every episode and be there for the three to four years.”

What do you think? Did you ever see Vinyl? Do you think it deserved a second chance?

I want more, I can not wait for season 4 please make season 4 LOVE Ronald his my crush

I wanna see more of that. Serie was just starting…season 2 could be even better.

I loved this show so very sad it is over ….I read some of the comments left me confused …too violent really? The show was just ramping up chacters finally maturing, very entertaining gotta love the 70s vibe …

I hope, that is not the final end. I will have a second step. THIS is a amazing series… I love them…

It was my favored show. It showed the development of new musical trends in the seventies. I was extremely disappointed when the show was canceled. I am still hoping that ( 2 years later) somebody will pick up the show and add more seasons.

Not relatable to most people? Too violent? Anybody who says these things clearly doesn’t know or understand Scorcese’s work. Cannavale has everything it takes to carry a series, and I am very sorry it didn’t return. The canvas was broad, which made the plot scattered. It needed tightening, no doubt. But it had the seed of perfection in it – unrealized.

“Not relatable to most people? Too violent? Anybody who says these things clearly doesn’t know or understand Scorcese’s work.”

And anybody who can up with a response like that evidently hasn’t seen Scorsese’s work. Unsatisfyingly told stories and characters you just don’t care about are the hallmarks of this guy. Have been his entire career.

I thought I would love the show as the setting is amazing and it’s about music but I couldn’t watch past the first episode. I like Bobby Cannavale but I don’t think he has enough to carry a show and I realized I didn’t care what happened next. And I found the smashing of the guy’s vocal cords so cruel, I couldn’t get past it. The show could have been great but they missed the mark.

I was deeply saddened on the cancellation of ” Vinyl ” I loved the show due to my roots in the entertainment field. “Vinyl ” was my time and era. I hope that maybe “Vinyl ” will return with Mr. Scorsese at the helm of course

I never watched this show because it seemed so out of step with what is going on in current times and couldn’t make the historical connection. Nor was it relatable or relevant to most people experiences in general.