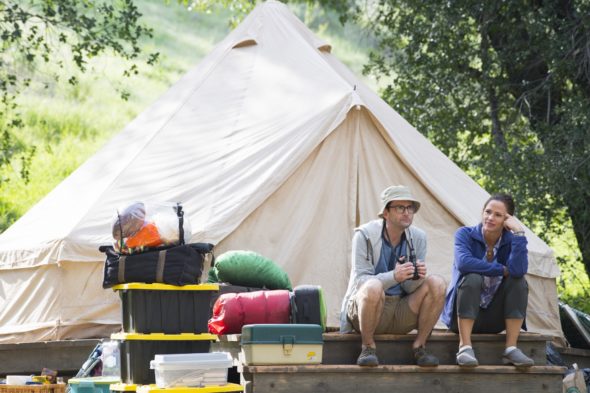 Is the first season of the Camping TV show on HBO a breath of fresh air? As we all know, the Nielsen ratings typically play a big role in determining whether a TV show like Camping is cancelled or renewed for season two. Unfortunately, most of us do not live in Nielsen households. Because many viewers feel frustration when their viewing habits and opinions aren’t considered, we’d like to offer you the chance to rate all of the Camping season one episodes here. *Status update below.

An HBO comedy, Camping stars Jennifer Garner, David Tennant, Juliette Lewis, Arturo Del Puerto, Ione Skye, Janicza Bravo, Brett Gelman, Bridget Everett, Cheyenne Haynes, Duncan Joiner, Chris Sullivan, and Rhiannon Leigh Wryn. When a group of friends retreats to the lackluster Brown Bear Lake campsite for a birthday celebration, control-freak Kathryn McSorley-Jordell (Garner) is determined that everything will go off without a hitch. There’s only one thing Kathryn never counted on — another woman coming along to undermine all her plans. Their back-to-nature camping trip soon tests the marriages and friendships of the campers involved.

What do you think? Which season one episodes of the Camping TV series do you rate as wonderful, terrible, or somewhere between? Should HBO cancel or renew Camping for a second season? Don’t forget to vote, and share your thoughts, below.

*Update: The ratings were low and the co-creators don’t have interest in making a second season, at least for now.

Garner was fantastic in this role. Very relatable,i think everyone knows someone like her. Juliette Lewis was absolutely Perfect for the antagonist. Nielsen ratings are never accurate. It always takes more than 1 season for people to catch on. I really wish HBO would consider giving it a 2nd run. Great possibilities with very endearing characters.

This show grew on us and now we would like another season!

Horrible show, I can’t believe Jennifer Garner could act so badly and Lena Dunham wrote this. I can’t even watch for 15 minutes a show and I’ve tried to give it a chance. I loved Girls. What happened?? Terrible plot. Please do not renew, I won’t watch it!