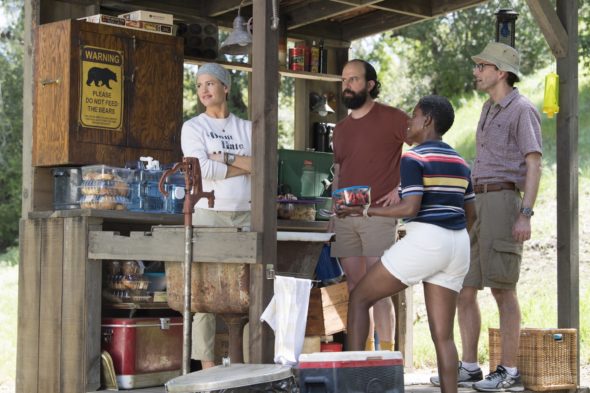 Most HBO TV series don’t score big in the Nielsen ratings race, unless they’re named Game of Thrones. Of course, the pay-cable network doesn’t have to please advertisers. Instead, it wants to run the kind of programming that will breed loyal subscribers and attract new ones. Enter the Camping TV show. Does it have the right stuff to score another season? Will Camping be cancelled or renewed for season two? Stay tuned. *Status update below.

An HBO comedy from Lena Dunham, Camping stars Jennifer Garner, David Tennant, Juliette Lewis, Arturo Del Puerto, Ione Skye, Janicza Bravo, Brett Gelman, Bridget Everett, Cheyenne Haynes, Duncan Joiner, Chris Sullivan, and Rhiannon Leigh Wryn. When a group of friends retreats to the lackluster Brown Bear Lake campsite for a birthday celebration, control-freak Kathryn McSorley-Jordell (Garner) is determined that everything will go off without a hitch. There’s only one thing Kathryn never counted on — another woman coming along to undermine all her plans. Their back-to-nature camping trip soon tests the marriages and friendships of the campers involved.

What do you think? Should HBO cancel or renew its Camping TV series for a second season? What are your thoughts on season one?

Update: The ratings were low and the co-creators don’t have interest in making a second season, at least for now.

I ended up loving this show! There is so much humor in it and the acting makes all the characters believable. Fingers crossed there is another season!

I have never hated a character more than Kathryn Mcsorley – Jodell.

I love this show, I think they could do so much with it.

I also wish they were longer,

Please don’t cancel/ Love the show and think it gets even better with each episode as we get to know the characters better. It has humor, sensitivity, and is quite believable. There must be a season 2

I hope the show is NOT canceled. It gets bettter with each episode now that we know the characters. It has humor, sensitivity and is quite believable. My only complaint is that the episodes are not 60 minutes.