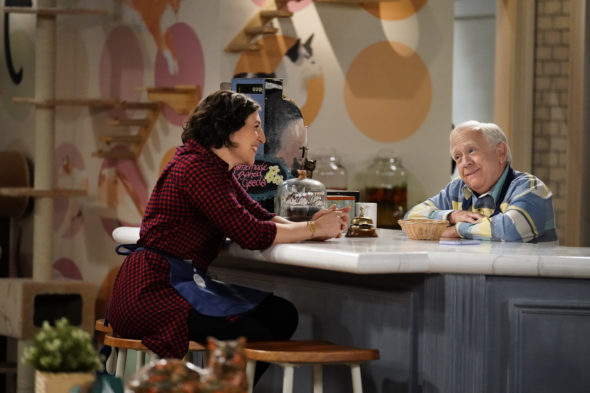 Will Kat’s business and TV series survive? Has the Call Me Kat TV show been cancelled or renewed for a second season on FOX? The television vulture is watching all the latest cancellation and renewal news, so this page is the place to track the status of Call Me Kat, season two. Bookmark it, or subscribe for the latest updates. Remember, the television vulture is watching your shows. Are you?

Airing on the FOX television network, the Call Me Kat TV show is based on the British Miranda series. The U.S. sitcom stars Mayim Bialik, Swoosie Kurtz, Kyla Pratt, Cheyenne Jackson, Leslie Jordan, and Julian Gant. The story follows Kat (Bialik), a woman who struggles every day against society and her mother to prove that she can live a happy and fulfilling life — despite still being single at 39 years old. Kat’s mother, Sheila (Kurtz), views her daughter being single as her own personal failure. After leaving her job as a University of Louisville college professor, Kat spends the money her parents had set aside for her wedding to open a cat café. Working alongside Kat are Randi (Pratt) and Phil (Jordan). As Kat celebrates her independence, her single-forever plans begin to veer off-course. Her former crush and good friend, Max (Jackson), returns to town and takes a job as a bartender at the piano bar across the street and works with his friend, Carter (Gant).

The first season of Call Me Kat averaged a 0.59 rating in the 18-49 demographic and 2.61 million viewers. Find out how Call Me Kat stacks up against other FOX TV shows.

Will FOX cancel or renew Call Me Kat for season two? Other than Last Man Standing (which is ending this year), the network doesn’t have any other live-action sitcoms. Typically, networks like to be able to pair new comedies with established ones so, unless FOX is abandoning that practice or doesn’t plan to introduce any new live-action comedies next season, I think this series has a good chance of being renewed.  I’ll update this page with breaking developments. Subscribe for free alerts on Call Me Kat cancellation or renewal news.

What do you think? Are you glad the Call Me Kat TV show has been renewed for a second season? How would you feel if FOX had cancelled this TV series, instead?

I love, love the show….Call Me Kat. PLeassssssssssss do not cancel….Thank you for Season 1 and now 2. When 2?

Fantastic! Thank you FOX for Renewing the fun comedy show ‘Call Me Kat’!
My wife and I love this show and all of the characters in it are wonderful!
We are looking forward to the shows coming up in the New Second Season! ~ Peace, Marc