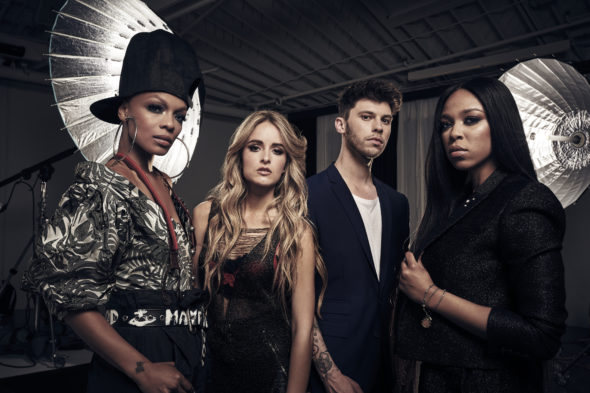 A FOX reality TV series singing competition, The Four: Battle for Stardom stars is hosted by solo artist and Black Eyed Peas vocalist, Fergie. The show features singers facing off in hopes of winning a promotional deal with iHeartRadio. Industry pros Sean Combs, DJ Khaled, and Meghan Trainor advise the contestants, throughout. In addition to the IHeartRadio promotion, the winner will also benefit by having Combs, Khaled, and Trainor join their team and guide them toward stardom.

omg i love this show and im
not even a big singing show fan. Love the judges. !

Do not cancel please!!!

Please do not cancel The Four – this is one of the best shows with the best singers on TV. I have watched it since the beginning & I’m sick of all the good show that are canceled. PLEASE keep this show that has true talent!!!!!

Fox should keep The four running i love the show and the judges its wonderful and very good …. Please keep it on my whole family watchs it every week and now we waiting on season 3

I really love this show. It brightens my life. I look forward to Thursday’s. Wish it came on twice a week. Can’t wait for season 3

I watched both seasons but do not really enjoy the show. I like to see the singers and watch because the main network shows are reruns. Don’t think the judges should choose the winner. They should go by what the majority of the audience wants.

I do agree with thst, the audience should choose the winner not the judges, because it is the audience is where the ratings come ftom..

This show needs to go!! Wr already have American Idol & The Voice… We dont need another wana be sing competition

This show is horrible!!! We already have American Idol & The Voice… We dont need another wana be sing competition

I like the show and really like to see new talented people get a real chance to show that they are talented and really can sing. The 2 things that really upset me are # 1 the voting: i think that all viewers should be able to vote on who wins each challenge, not just the studio audience, i think that is really biased and a little unfair to the singers. # 2 the challenges should be in the same jaundras of music and the same sex, men and women( voices are different) and perform differently. Not a fair challenge… Read more »