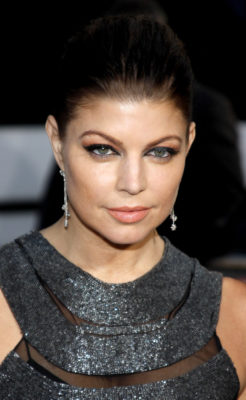 Fergie is coming to FOX. Today, the network announced the musician will host the upcoming TV show The Four: Battle for Stardom.

The singing competition series “begins where most competitions end: with the four finalists. Four super-talented and fiercely competitive singers, chosen from their auditions by the show’s panel of music industry experts, will try to defend their coveted spots on the stage, as they are challenged individually by new singers determined to replace them.”

Alongside Fergie, DJ Khaled, Meghan Trainor, Sean Combs, and Charlie Walk will serve as panelists on The Four: Battle for Stardom. The series debuts on FOX on January 4th at 8 p.m. ET/PT.

“I am very excited and proud to be the host of THE FOUR: BATTLE FOR STARDOM,” said Fergie. “This is a unique and modern show format that I believe will set the standard for the next generation of singing competition series on TV. I am looking forward to being by the contestants’ sides during what could be the most important performances of their lives. Along with these amazing panelists whom I know and love, I hope my experiences as a solo artist and as a member of The Black Eyed Peas can help guide them in their quest to make it in the music industry.”

“Fergie is a genuine superstar,” said Rob Wade, President, Alternative Programming and Specials, Fox Broadcasting Company. “She’s fierce, she’s a force in her own right and she knows exactly what these singers are going through. So who better than her to help guide them as they fight their way to the finish.”

As previously announced, Grammy(R) Award-winning musician, record producer and songwriter Sean “Diddy” Combs, record-producing hit-maker DJ Khaled, Grammy-winning recording artist and songwriter Meghan Trainor and record label executive Charlie Walk will serve as the show’s panel of experts. These panelists are true star-makers and are responsible for some of the biggest hits and recording artists in the music industry today.

THE FOUR: BATTLE FOR STARDOM begins where the other shows end: With the best. These four top-notch singers, spanning all music genres, will fight each week to defend their coveted seats on the show, as determined newcomers challenge them and try to knock them out of the competition. The singer who is the last standing at the end of the competition will earn the ultimate prize: the panel of industry experts becomes key players on the winner’s team. This elite group of starmakers will guide the winner’s career to help make him or her a breakout star. To audition for THE FOUR: BATTLE FOR STARDOM, please visit thefourmusic.com.

As part of the grand prize, the winner will be named an iHeartRadio “On The Verge” artist. iHeartRadio’s On The Verge program provides artists with unparalleled national reach through on-air radio exposure, as well as digital and social support across iHeartMedia’s powerful range of music and entertainment platforms. FOX also has teamed up with iHeartMedia to support auditions, assist in the search for talent and boost the careers of artists throughout the run of the competition.

Influencing a generation of stars to follow, Fergie remains pop’s leading lady. On September 22, the eight-time Grammy(R) Award-winning multi-Platinum solo artist released her anxiously awaited visual experience and second full-length album, “Double Dutchess” – the first release for her own Dutchess Music, the label she founded in partnership with BMG this year. The Visual Experience quickly captured the No. 1 spot on iTunes, in addition to the album becoming the No. 1 pop album in the United States, hitting No. 1 on the Billboard Current Pop Albums Chart, No. 4 on the Top Independent Albums Chart and No. 9 on the Top Albums Chart. It became a runaway smash globally, going Top 10 on iTunes Overall in eight countries and Top 5 on the iTunes Pop Albums Charts in 11 countries. It’s gaining even more steam as she sets her sights on a 2018 world tour. This blockbuster follows up one of the most successful albums of this century, “The Dutchess,” which sold 7.2 million albums and 29 million tracks around the globe and yielded three No. 1 Billboard Hot 100 hits: “London Bridge,” “Glamorous” and “Big Girls Don’t Cry,” as well as Top 5 smashes “Fergalicious” and “Clumsy.” She also remains a driving force in The Black Eyed Peas, whose legacy eclipses sales of 35 million records and 60 million tracks over the course of four multi-Platinum offerings. Once again, she sets the pace for pop.

THE FOUR: BATTLE FOR STARDOM was created by Armoza Formats and is produced by ITV Entertainment in association with Armoza Formats. David George, Adam Sher, David Eilenberg, Becca Walker, David Friedman, Avi Armoza, Nehama Cohen and Moshiko Cohen are executive producers. Additionally, Sean “Diddy” Combs will serve as a producer on the series. “Like” THE FOUR: BATTLE FOR STARDOM on Facebook at facebook.com/TheFourOnFox. Follow the series on Twitter @TheFourOnFox and join the conversation using #TheFour. Check out photos and videos on Instagram @TheFourOnFox.”

What do you think? Are you a fan of Fergie? Will you watch The Four?