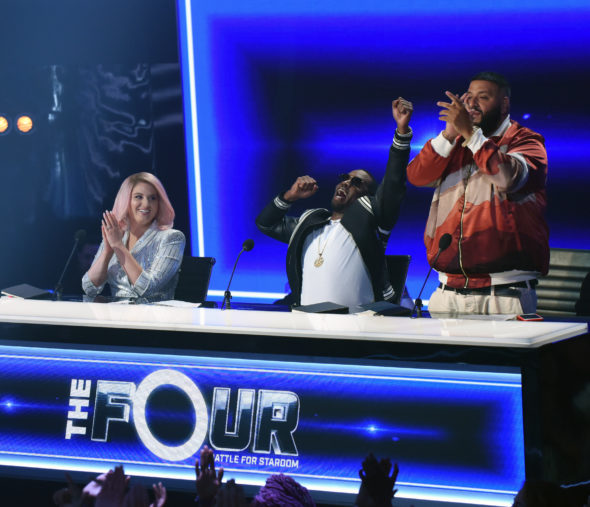 Is this the final refrain? Has The Four: Battle for Stardom TV show been cancelled or renewed for a third season on FOX? The television vulture is watching for the latest cancellation and renewal news, so this page is the place to track the status of The Four: Battle for Stardom, season three. Bookmark it, or subscribe for the latest updates. Remember, the television vulture is watching your shows. Are you?

A FOX reality TV series competition, The Four: Battle for Stardom is hosted by solo artist and Black Eyed Peas vocalist Fergie. The series features singers facing off in hopes of winning a promotional deal with iHeartRadio. The contestants, or “gladiators,” are advised by industry pros Sean Combs, DJ Khaled, and Meghan Trainor. In addition to the IHeartRadio promotion, the winner will also benefit by having Combs, Khaled, and Trainor join their team and guide them toward stardom. The season two gladiators are Carvena Jones, James Graham, Stephanie Zelaya, and Sharaya J.

Will FOX cancel or renew The Four: Battle for Stardom for season three? The ratings are way down from its first cycle earlier in the 2017-18 season but they’re still pretty good for a summer show on FOX. I think it will be renewed but suspect it will air in Summer 2019. I’ll keep an eye on the Nielsens and update this page with breaking developments. Subscribe for free The Four: Battle for Stardom cancellation and renewal alerts.

Update: FOX has not renewed The Four for a third season.

What do you think?  Were you hoping that The Four: Battle for Stardom TV show would be renewed for season three? Are you sorry that FOX cancelled this TV series, instead?

I want a renewal of ‘The Four’ show

Multiple sources confirmed to Page Six that The Four is on the verge of being cancelled because of Diddy’s high salary. … “The show tried to get Diddy to lower his rate, and he won’t. They’re not bringing the show back because of that. The decision isn’t definite yet, but it’s not likely that it will return.”

Diddy response to claims of his 1 million too expensive per episode salary for 7 episodes is “[This] story is completely false. I have a great working relationship with Fox. They have been great partners with me and my family, and this is not how I conduct business. I love this show. It is very special to me.