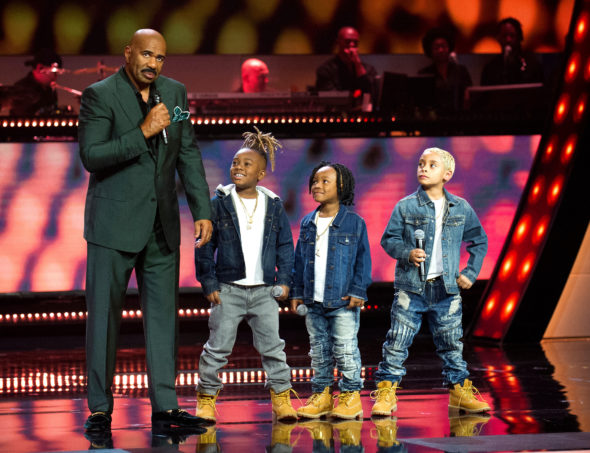 Will the audience cheer or jeer? Has the Showtime at the Apollo TV show been cancelled or renewed for a second season on FOX? The television vulture is watching for the latest cancellation and renewal news, so this page is the place to track the status of Showtime at the Apollo, season two. Bookmark it, or subscribe for the latest updates. Remember, the television vulture is watching your shows. Are you?

Airing on the FOX television network, Showtime at the Apollo is hosted by Steve Harvey, with co-host Adrienne Houghton. Staged at the renowned Harlem theater, the reimagined, weekly series features elements of the Apollo Theater’s celebrated Amateur Night. Showtime at the Apollo gives new performers the chance to perform for a famously demanding audience. When an act doesn’t meet its high standards, the audience is far from shy about expressing disapproval. Each week, in addition to fledgling talent, Harvey and Houghton also welcome big music and comedy stars to the stage.

Will FOX cancel or renew Showtime at the Apollo for season two? Though the ratings have been poor, I’m guessing that this series doesn’t cost much to produce. It will likely be cancelled but I could see FOX renewing it to help fill holes in their 2018-19 schedule. They may also want to keep a Steve Harvey show on their network. I’ll update this page with breaking developments. Subscribe for free Showtime at the Apollo cancellation and renewal alerts.

What do you think? Were you hoping that the Showtime at the Apollo TV show would be renewed for a second season?

I love Showtime Apollo and prayerfully awaits to see it being brought back, real soon‼️

Yes they do need season 2. And also we need Kiki Shepard back

Loved this show! I suspect the late night airing had something to do with the ratings. Put it on earlier and I imagine it gets the attention it deserves.