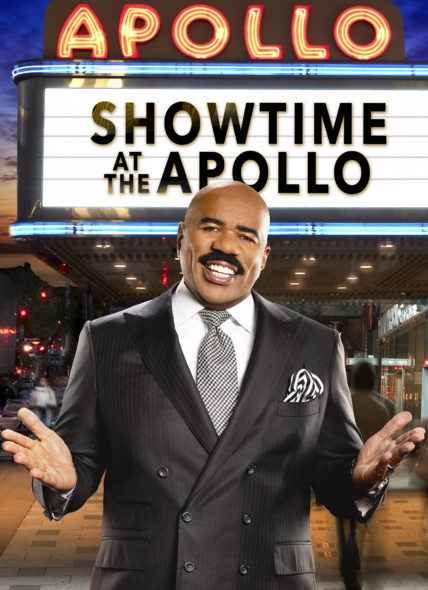 TV show description: A revival of the syndicated talent showcase, the Showtime at the Apollo TV show is hosted by Steve Harvey, with co-host Adrienne Houghton. The reimagined, weekly series features elements of the Apollo Theater’s renowned Amateur Night — a talent competition which (at the premiere of this TV series) is in its 82nd year.

Showtime at the Apollo gives new artists the chance to perform for a famously demanding audience. When an act doesn’t meet its high standards, the audience is far from shy about expressing disapproval.

FOX first revived Showtime at the Apollo with a series of specials that kicked off in December of 2016, prior to ordering the reboot to series. In the weekly series, Harvey and Houghton also welcome big music and comedy stars to the stage.

Showtime at the Apollo is a homecoming for Harvey, who began his stand-up career at the famed Harlem theater and took the reins as host of the original, syndicated series, back in 1993. What stars will emerge from the reboot? Stay tuned.

Series Finale:
Episode #15 — Finale
The best of the best return to perform one more time for a chance at headlining their very own show at the Apollo.
First aired: May 24, 2018.

What do you think? Do you like the Showtime at the Apollo TV series? Should this TV show have been cancelled or renewed for a second season on FOX?

Been watching this show since 91
MUST keep it going

Been watching this show since 91. MUST keep it running

Renew for another season. I have really enjoyed Steve Harvey as the host!

Showtime at the Apollo….. I do not like your host Steve Harvey. In one episode he curses 14 times in 35 minutes. That is not entertainment but pure nasty!!!!! I like the show but the host S***KS!!! How sad for prime time. Quality has gone.