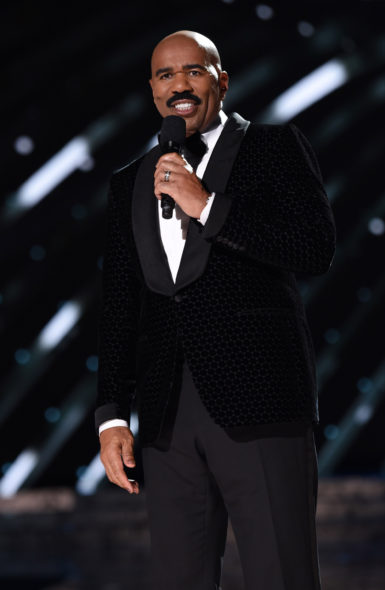 It’s showtime! Steve Harvey will host a re-imagined two-hour Showtime at the Apollo TV show special on FOX, Monday, December 5, 2016 at 8:00pm ET/PT. He will also host a second, one-hour special to air in early 2017. Could this be a trial balloon for a FOX series revival? The original variety show ran in syndication from 1987 until it ended in 2008. The Apollo Live reboot ran for three seasons on BET.

For the first couple of seasons, various celebrities hosted Showtime at the Apollo, with co-host Kiki Shepard (1987-2002) Sinbad took the role of regular host from 1989 to 1991. After his departure, the show reverted to revolving guest hosts until 1993, when Steve Harvey — who began his stand-up career at the famed Harlem theater — took the job. He would remain with the show for seven years. When he exited in 2000, Rudy Rush boarded as host.

Get the details on the Showtime at the Apollo specials, from this FOX press release.

STEVE HARVEY TO HOST “SHOWTIME AT THE APOLLO,” A TWO-HOUR EVENT BASED ON THE CLASSIC SHOWCASE SERIES, AIRING MONDAY, DECEMBER 5, ON FOX

Emmy Award-winning personality Steve Harvey will host SHOWTIME AT THE APOLLO, a two-hour event and reimagining of the classic talent showcase series, in which Harvey will celebrate his return to the famed theater, where he launched his own career, and where he’ll be joined by some of the biggest stars in comedy and music. The star-studded special will air Monday, Dec. 5 (8:00-10:00 PM ET/PT) on FOX. An additional one-hour special, also hosted by Harvey, will air in early 2017.

Also to be featured in the special are elements from the Apollo’s legendary Amateur Night – the long-running, live talent competition, now in its 82nd year – which provides a platform for up-and-coming artists to perform in front of the toughest audience in the world. The Apollo audience is famed as one of entertainment’s most boisterous and brutally honest and those amateurs who don’t win over the crowd risk being booed off the stage.

Amateur Night at the Apollo launched the careers of many iconic artists, including James Brown, Stevie Wonder, Lauryn Hill, Michael Jackson and The Jackson Five, D’Angelo and countless others, and the show continues to present new talent on the legendary Apollo stage every Wednesday night. The Apollo Theater’s Amateur Night has long been revered by artists as a transformative experience during which up-and-coming talent feel the power of the legendary performers who have come before them, while audience response can help make or break a career.

“I’m excited to be going back home to the Apollo to celebrate the history of this great theater,” said Harvey. “I have great memories from my time there, and this is going to be a homecoming party that you won’t want to miss.”

“Since its inception in 1934, the world’s original talent competition – Amateur Night at the Apollo – was, and continues to be, a primary source for discovering new talent and spotlighting up-and-coming artists. That tradition was continued with the successful 21-year run of the ‘Showtime at the Apollo’ television program,” said Jonelle Procope, President and CEO of the Apollo Theater and an executive producer of the special. “We’re proud to continue to produce our live, weekly show, and are equally excited to be partnering with FOX to produce this SHOWTIME AT THE APOLLO special and to bring the Apollo experience back to television!”

“The Apollo Theater played a crucial role in so many of this nation’s most talented artists, including Steve, and we couldn’t be happier to have him lead us back to this legendary venue,” said David Madden, President, Entertainment, Fox Broadcasting Company. “We’re sure this will be a fantastic night of entertainment.”

Steve Harvey is a TV personality, talk show host, actor and comedian who currently hosts three popular TV shows: “The Steve Harvey Show,” which premiered in 2011; breakout hit “Little Big Shots” and game show “Family Feud,” which he began hosting in 2010; as well as a nationally syndicated radio show, “The Steve Harvey Morning Show,” since its inception in 2000. He also hosted the 2015 MISS UNIVERSE contest, which aired on FOX. Additionally, Harvey will host the upcoming “Steve Harvey’s Funderdome,” a new game show featuring young innovators and entrepreneurs. Harvey began his career doing stand-up comedy in the mid-1980s. His success as a comedian eventually led to a long stint as host of “It’s Showtime at the Apollo,” as well as various acting, hosting, writing and producing roles.

Harvey’s television and film career includes roles in “Me and The Boys,” “The Steve Harvey Show,” “Steve Harvey’s Big Time Challenge,” “Love Don’t Cost a Thing,” “You Got Served,” “Johnson Family Vacation” and “Madea Goes to Jail.” In addition, Harvey is a best-selling author.

About the Apollo Theater

The legendary Apollo Theater – the soul of American culture – plays a vital role in cultivating emerging talents and launching legends. Since its founding, the Apollo has served as a center of innovation and a creative catalyst for Harlem, the city of New York and the world. With music at its core, the Apollo’s programming extends to dance, theater, performance art, spoken word initiatives and more. This includes the October 2014 premiere and 2015 international tour of the dance celebration project “James Brown: Get on the Good Foot”; the annual Africa Now! Festival; Apollo Club Harlem; and the 2016 New York premiere of the opera “Charlie Parker’s YARDBIRD.”

The Apollo is a presenting organization that also produces festivals, large-scale dance and music works organized around a set of core initiatives: Apollo Music Signature Programs – Amateur Night, Salon Series and Apollo Music Café; Legacy Series – work that celebrates and extends the Apollo’s legacy through a contemporary lens; Global Festivals, including the Women of the World (WOW) Festival and Breakin’ Convention; international and U.S.-based artist presentations focused on a specific theme; and Special Projects – multidisciplinary work with partner organizations.

Since introducing the first Amateur Night contests in 1934, the Apollo Theater has served as a testing ground for new artists working across a variety of art forms, and has ushered in the emergence of many new musical genres, – including jazz, swing, bebop, R&B, gospel, blues, soul, and hip hop. Among the countless legendary performers who launched their careers at the Apollo are D’Angelo, Lauryn Hill, Machine Gun Kelly, Miri Ben Ari, Ella Fitzgerald, Sarah Vaughan, Billie Holiday, James Brown, Michael Jackson, Gladys Knight, Luther Vandross and Stevie Wonder; and the Apollo’s forward-looking artistic vision continues to build on this legacy. The Apollo Theater is a not-for-profit organization with the mission to extend the institution’s role in fostering artistic innovation and in building appreciation of American culture around the world. For more information, visit www.apollotheater.org.

What do you think? Do you miss the Showtime at the Apollo TV series? Could the specials mean FOX is thinking about reviving the show? Let us know, below.

Its about time for the very first American Idol TV show to get back on the air. I missed the variety of entertainment and excitement that the show offered. Nothing better than being home on a Friday night, watching It’s Showtime at the Apollo just before heading out to the club!!!!