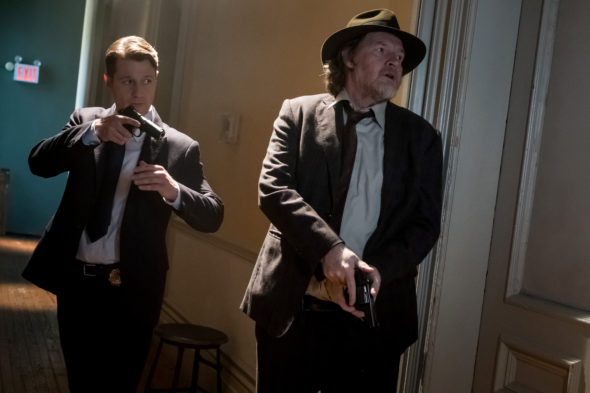 Can Bruce Wayne help Jim Gordon and Harvey Bullock beat back Gotham City’s criminal element? Has the Gotham TV show been cancelled or renewed for a fifth season on FOX? The television vulture is watching for the latest cancellation and renewal news, so this page is the place to track the status of Gotham, season five. Bookmark it or subscribe for the latest updates. Remember, the television vulture is watching your shows. Are you?

The fourth season of Gotham averaged a 0.77 rating in the 18-49 demographic and 2.56 million viewers. Compared to season three, that’s down by 29% and down by 23%, respectively. Find out how Gotham stacks up against the other FOX TV shows.

Although the current season will give them a decent sized syndication package, I think it is more than likely that Gotham will be renewed, rather than cancelled. After all, despite its drop in the third season, the show remains a top ten performer for FOX. For now, I’ll keep a hungry eye on the Nielsens and update this page with breaking developments. Subscribe for free updates on any Gotham cancellation and renewal news.

*5/13/18 update: FOX has renewed the Gotham TV show for a fifth and final season. Details here.


What do you think? Are you glad that the Gotham TV series has been renewed for season five? Should that be the final year?

season 6 is much needed i really love this show

Gotham is by far the best programme on television I absolutely love it and I am fed up of big companys producing good series everyone loves and mesing around with them i.e. toying with your emotions by breaking willy nilly through the season and leaving it up until last minute to let you know if this will be renewed a season and even now I hear we have to wait until maybe jan 2019 for season 5 and that it may or may not last for 13 episodes (or 22 like the rest) get your act together people this eries… Read more »

Marvel comics might own the big screen but this DC series hits all the right marks and is fantastic. Some amazing casting (Penguin, Selina, Gordon) and a fantastic atmosphere and feel. Hope it stays until season 8 or 9 at least. 😀

Gotham is my favorite show on television I look forward to it every Monday or Thursday night whatever night it’s on. The characters are awesome! I love the regeneration of the of the penguin;I love all the characters , i’ve said for the last season and a half to my wife that they need to move the story along and bring Batman into the story it is a fantastic format it is a fantastic background but they need to bring Batman and the series and I think he’ll see the numbers grow Jerome is a wonderful form of the joker… Read more »

They should renew Gotham over lethal weapon

Please please please don’t cancel Gotham, gotham is the best show on tv by far it would be such a shame if it gets cancelled

Please re-new we love this show in the uk