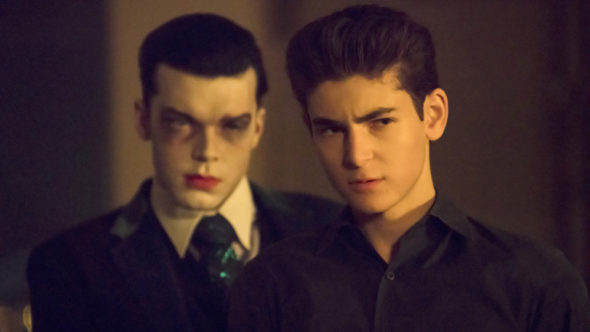 Despite low and declining ratings that would have seen some series cancelled, FOX has renewed its Gotham TV show for a fifth season. The season Batman prequel’s season five renewal will ensure it has a good sized syndication package but it will also be the show’s final year.

Gotham: A Look at the Ratings

The fourth season of Gotham is averaging a 0.78 rating in the 18-49 demographic and 2.58 million viewers. Compared to season three, that’s down by 28% and down by 22%, respectively. Check its performance against the other FOX TV shows.

The fifth and final season will focus on Bruce Wayne’s transformation into Batman. Word is that it likely won’t air until midseason.

A statement from the producers states “the fifth and final season will wrap up this unique origin story of the great DC Comics Super-villains and vigilantes, which revealed an entirely new chapter that has never been told.”

What do you think? Are you still watching the Gotham TV series? Did you think it would be cancelled or renewed for season five? Do you think it should end there?

If they can take to a new chapter they should continue . They need to change it up somehow

Gotham should not be cancelled. It is just transitioning into the best season. How Bruce Wayne turns into Batman. It should continue with the rise of Batman and how he help the city of Gotham.

This season is the best yet, don’t cancel after it’s just getting somewhere in the storyline. Keep it going like now, and better, and the ratings should soar! Love Gotham, please continue the series.

Please dont cancel Gotham. It is nice to see how everyone became what they are. I understand that this show is a presqual but I feel that there is still more much more for Bruce to become batman i think he still has a couple years before he become full blown batman. And even other characters there is so much more that they need to become there full blown character And what’s wrong with making it into the actual batman show. Keep in mind while i am not a fan of batman. I do love this show.

Please don’t cancel Gotham .. It’s just becoming into itself. Love the characters , and you always find a way to bring in a new one or save one… Well done
What about saving the City … I love thus show

No, it should not be cancelled. It’s just starting to get to the good to great parts of Bruce Wayne as Batman. There’s so many old and new villains that Batman will, capture, kill or tame. The actors are fantastic. Not to mention the great detectives who will be by his side along the way. “Gotham” is one of those rare shows like “Supernatural” and “The Walking Dead”. “Supernatural ” however is in a class all by itself, which can’t be matched.

It’s one of the finest written, produced and revolutionary series ever. The acting is superb, the photography is captivating and the characters pull and drag you into submission. Gotham has everything and keeps you wanting for more. Please give it another 2 years.

My family loves Gotham and would very much like to see it continue for many more seasons.

I hate the fact that Gotham will end! it is the one comic show that i got involved into. I will be upset to see it end. It is one of my favorite shows on fox! I will truly miss the show! I wish it would stay !