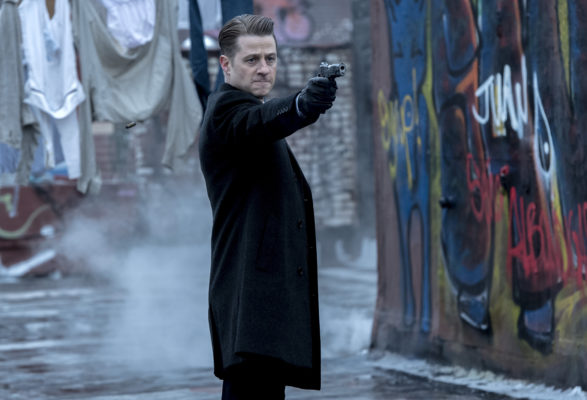 What’s in store for the final season of Gotham? According to ComicBook, the fifth and last season of the FOX TV show will have fewer episodes than normal.

During a recent fan Q&A, star Carmen Bicondova confirmed the final season of Gotham will contain 10 episodes instead of the standard 13 or 22. FOX has yet to announce a premiere date for season five, but it will air during the 2018-2019 season.

I will sorely miss Gotham. I don’t understand the drop in ratings, maybe it’s because more folks are DVR’ing, and watching later.
This show deserves at least 2 more seasons!

I will definitely miss GOTHAM! It’s the one show my Dad and I watched all the time together! I just love all the characters and their interactions. Honestly, I just don’t know FOX………….WHY??? As to how Gotham will end? Surprise me!!

would like to see it end when Bruce finds cave, and is a man not boy. when he fits in the suit and makes all the special bat devises to fight crime. when he has put penguin and joker, and all the criminals behind Jim Gordan’s jail bars. when they stop coming back from the dead and escaping. ratings dropped because you put way to much time into villains that don’t die, and no time developing the Bruce(dads secrets) becoming Batman. About 5 more seasons should do it! Thank you

This tv series was basically the only reason why I watched it!? The same was for The Exorcist!? But now there losing there own creativity mind with dumb shows that I have no interest to watch!? I’m not sure about the new show “The Cool Kids” hopefully it’s a reminder of when I was growing up as a kid the funny hilarious tv series The Carol Burnett show! Let’s just hope it is!

Gotham has been so interesting to watch as another take on Batman legend. Would love
to see it continue as there is more to Bruce before he grows up into adult Batman.
The characters have been so good and portrayed by great acting.

If they shed Gotham they certainly aren’t going to take back another DC Comics show they have already shed.

Why isn’t the cw considering picking the series up ? It has a decent following so it should bring high numbers on their network

Honestly, why even bother? I LOVE this show but to now hear they’re cutting it back another three episodes, it’s like I’d rather they shove those episodes up their ass. It’s an insulting gesture. The fans are who keep shows on air except for when the suits ignore them. At least give us and the show a good long goodbye.

Do not want Gotham to end – great show!!