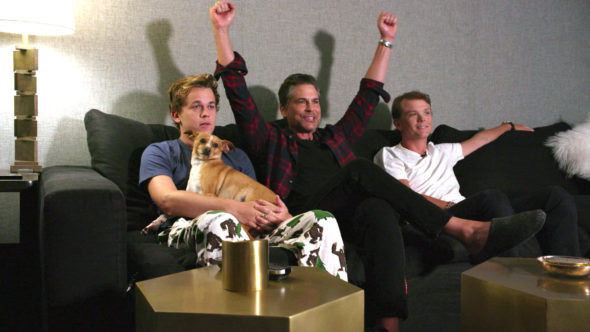 A FOX unscripted series, Celebrity Watch Party brings families together to celebrate the best in films, entertainment shows, and news on television in any given week. The TV show offers fans a peek into the home lives of their favorite celebrities, as they film themselves reacting (along with their families) to sometimes hilarious and exciting shows and talked-about news events on television each week. Participants in the first season include Rob Lowe, Meghan Trainor, Joe Buck and Michelle Beisner-Buck, Raven-Symoné, Master P and Romeo, JoJo Siwa, Steve Wozniak, Curtis Stone, and Robert and Kym Herjavec.

I love this show …. with all that is happening it brings laughs ,and crying… please renew …. I can’t wait to see more 🙂 and I’m loving whole cast. I vote yes please more episodes.

The show is wonderful. Look forward all day to watching it. So sad when I see sports on instead.Sports belong on ESPN.

This show is great. I love watching their reactions as I have the same ones. There was a show years ago I think called “Coach Potatoe”. Was the same exact show but was with average people no celebs.. Would laugh the whole time so I was really happy to see it come back. Not sure if it was cancelled – hope not.

It has been cancelled?! I just found this show last night! What a hoot. I called my friend to watch. I’m so sick of reality shows so this was refreshing to watch. It felt just like being with friends. My granddaughter and I are “talkers” when we watch a show(not the men in the family tho), but I’m sure everyone will enjoy watching when we have our family over for our weekly movie night.

Vic (from the Netherlands)

I’m very sorry to hear about the cancellation for season 3. The show was very exciting and nice to follow. Let’s hope that that A+E Networks come to their senses and realize that the true fans really would like to see more of the adventures of dr. Hynek and capt. Quin. Otherwise we are stuck at the cliffhanger..