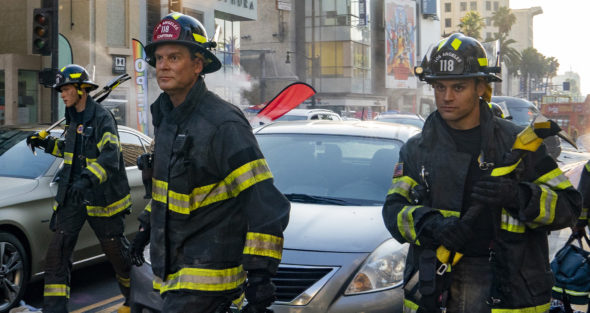 Will these heroes catch a break in the fifth season of the 9-1-1 TV show on FOX? As we all know, the Nielsen ratings typically play a big role in determining whether a TV show like 9-1-1 is cancelled or renewed for season six. Unfortunately, most of us do not live in Nielsen households. Because many viewers feel frustrated when their viewing habits and opinions aren’t considered, we invite you to rate all of the fifth season episodes of 9-1-1 here. Status Update Below.

A FOX first-responder drama series, the 9-1-1 TV show stars Angela Bassett, Peter Krause, Jennifer Love Hewitt, Oliver Stark, Kenneth Choi, Aisha Hinds, Rockmond Dunbar, Ryan Guzman, Corinne Massiah, and Marcanthonee Jon Reis. A scripted drama that’s been inspired by real-life experiences, this show centers on the police officers, firefighters, and dispatchers who are thrust into the most frightening, shocking, and heart-stopping situations. These emergency responders must try to balance saving those who are at their most vulnerable with solving the problems in their own lives.

What do you think? Which season five episodes of the 9-1-1 TV series do you rate as wonderful, terrible, or somewhere between? Do you think that 9-1-1 should be cancelled or renewed for a sixth season on FOX? Don’t forget to vote, and share your thoughts, below.

I still love 911. Please do not cancel it. I am older than the demographic.

Episode 14 was pretty outlandish. Not at all believable. And get rid of Maddie/Jennifer. Just can’t like the character, or maybe it’s the actor.

Please renewed season 3 so funny so good love this show,

Huge fan of 9 1 1. Love the cast! Great job everyone! Exciting episodes keep me at the edge of my seat…also makes me laugh at jokes. Watching since the beginning. Please keep the excitement coming.

911 is in the red because no one is watching it because it is not even on TV anymore.
Why is that anyway?.
I really miss that show.!

It’s available to watch on my TV. No cable just steaming fios

Like I have said many times before, I love 911 only and all story lines characters. 911 should be cancelled.

I am replying to myself…….911 should NOT BE cancelled. Sorry for previous comment…my bad

I love 9-1-1 the best of the other spin off. Can’t wait for the next season. I look for it every week.