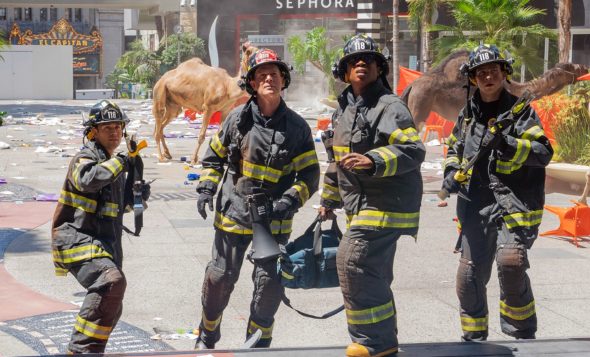 Look out L.A. — there are more disasters on the way! FOX has renewed the 9-1-1 series for a sixth season. The fifth season’s finale airs tonight.

An action procedural drama, 9-1-1 TV show stars Angela Bassett, Peter Krause, Jennifer Love Hewitt, Oliver Stark, Kenneth Choi, Aisha Hinds, Rockmond Dunbar, Ryan Guzman, Corinne Massiah, and Marcanthonee Jon Reis. A scripted drama that’s been inspired by real-life experiences, this show centers on the police officers, firefighters, and dispatchers who are thrust into the most frightening, shocking, and heart-stopping situations. These emergency responders must try to balance saving those who are at their most vulnerable with solving the problems in their own lives.

Airing on Monday nights, the fifth season of 9-1-1 averages a 0.76 rating in the 18-49 demographic and 5.20 million viewers. Compared to season four, that’s down by 28% in the demo and down by 20% in viewership in the live+same day ratings (including DVR playback through 3:00 AM).  It’s FOX’s highest-rated show of the current season. In the live+7 day ratings, the season averages a 1.40 demo with 8.21 million.

The fate of this show on the network came down to the wire and the series wasn’t included in FOX’s 2022-23 announcement press release. While the renewal of FOX’s top-rated series would seem like a slam-dunk, decisions have become more complicated since the sale of the show’s studio, 20th Television, to Disney. With fewer people watching shows via traditional commercial-supported television, a network’s profits on shows produced by outside studios are a lot smaller than they used to be.

Check out our FOX status sheet to track the network’s new series pickups, renewals, and cancellations. You can find lists of cancelled shows here.
What do you think? Have you enjoyed watching the 9-1-1 TV series? Are you glad that it’s been renewed for a sixth season on FOX?