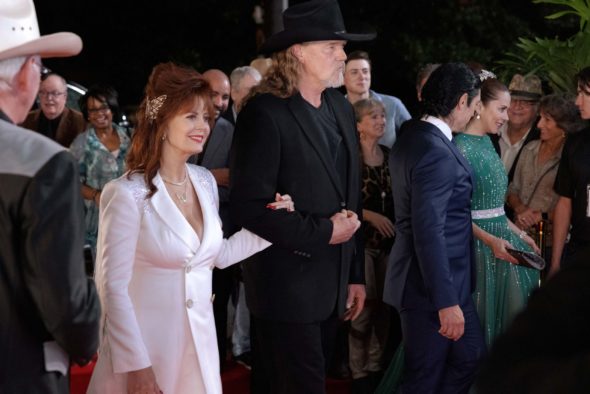 Monarch is seeing a huge delay. The new music drama was set for a big premiere on January 30th, but now FOX has delayed the series until this fall. The latest surge in the COVID-19 pandemic is blamed for the postponement.

“Monarch is a multigenerational musical drama about America’s first family of country music, the Romans. The Romans are headed by the insanely talented, but tough as nails Queen of Country Music Dottie Cantrell Roman, played by Sarandon. Along with her beloved husband Albie, played by Adkins, Dottie has created a country music dynasty. But even though the Roman name is synonymous with authenticity, the very foundation of their success is a lie. And when their reign as country royalty is put in jeopardy, heir to the crown Nicolette “Nicky” Roman, played by Friel, will stop at nothing to protect her family’s legacy, while ensuring her own quest for stardom.”

FOX released the following statement about the delay:

“With an incredible pedigree of talent and musical performances, the powerfully compelling drama, MONARCH, is a top priority for FOX Entertainment in 2022. Unfortunately, due to the unavoidable realities of the pandemic and the profound impact Covid-19 continues to have on our industry and around the world, it is necessary to reschedule MONARCH’s January 30 debut to the Fall. As the cornerstone of FOX’s new 2022-23 slate, shifting a show of this magnitude allows us to have its entire first season produced, create additional, high-profile content and promotional windows to support launch, and give our viewers the best opportunity to enjoy the series as intended with a non-compromised run of episodes. We thank our cast, producers, writers and the entire crew for their tireless work and continued dedication to the country music-filled world that is MONARCH.”

What do you think? Did you plan to watch Monarch on FOX later this month? Do you plan to still watch it when it arrives this fall?

I am a country music fan and had planned on watching this show. Guess I will have to wait until fall.

I was looking forward to the premier. Guess I have to wait

But FOX has already aired trailers of this series which show that it will premiere on January 30th and then move to its regular time of Tuesdays!!!!