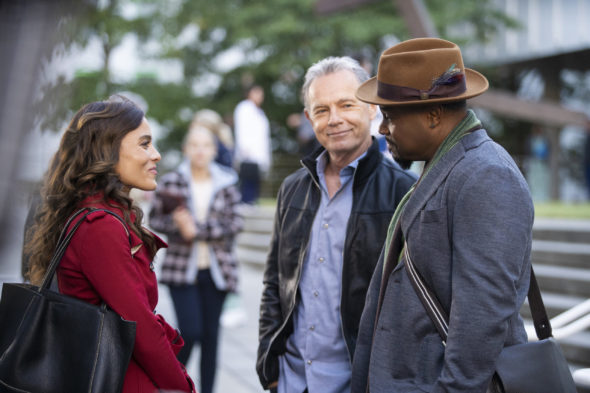 The Resident will return to FOX earlier than planned. The medical drama was scheduled to return on February 1st. Per TV Insider, the next new fifth season episode will air a week earlier, on January 25th.

The change was first revealed on Twitter by FOX.

We’re coming back in a big way. ❤️#TheResident returns on January 25. pic.twitter.com/erQ7gBEeR9

The mid-season finale ended with Conrad Hawkins (Czuchry) sharing test results with Dr. Bell (Greenwood, above, center)). The elder doctor has been experiencing issues impacting him in the operating room in recent episodes. Executive producer Andrew Chapman revealed more about what fans will see next on The Resident:

“It’s definitely medical. It’s definitely going to be an issue that we play going into the future. It’s going to be important for his character and for his soap with [Dr.] Kit [Voss, played by Jane Leeves] and his relationship to Conrad, who obviously will know about it but has been sworn to secrecy. And it will mark sort of a new path for Bell. [There’s] very much a level of drama and stakes really for Bell and where he’s going with his life and how he continues to be a doctor at Chastain. It’s a real thing. We’re definitely going to dive into it.”

What do you think? Are you excited about the return of The Resident on FOX?

I am so excited for this to come back on…I hate waiting, I miss Nic, but she lives on in that beautiful little girl she and Conrad had before she died. I am curious about Conrad’s future.

One of the best shows on TV…..but I miss “Nick”! She and Conrad really sizzled. Eager to get on with the show!

Agree 100%. They could have just gave her time off, or just a small time on the series, why kill her?

Can not wait,absolutely love this show!

Looking forward to another terrific season of The Resident

Great news – such a fantastic show!!

Love this show!! So happy that it’s returning!!

I was upset when Nkcki left but I can understand her reasoning. I wish they hadn’t made it permanent since at some time, she may want to return. I’ve been waiting for the new episodes to return and I want to thank the cast and crew for your hard work to bring us ‘The Resident’. You all are doing a great job

I ABSOLUTELY LOVE this show and I am thrilled it’s returning!!!

I Love this show There are twists and turns everywhere. I like that there is almost always a calm before the “storm” It makes it more exciting to watch I Love all of the characters/actors. I miss a few too Great show! I hope we get to see a lot more seasons Hopeful, it will NOT end soon! Very Entertaining ☺️❤️