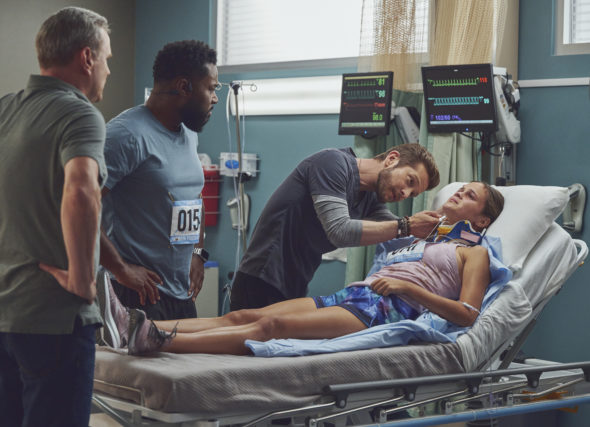 What’s ahead for the staff of Chastain Memorial Hospital? Has The Resident TV show been cancelled or renewed for a sixth season on FOX? The television vulture is watching all the latest cancellation and renewal news, so this page is the place to track the status of The Resident, season six. Bookmark it, or subscribe for the latest updates. Remember, the television vulture is watching your shows. Are you?

The fifth season of The Resident averages a 0.43 rating in the 18-49 demographic and 3.13 million viewers. Compared to season four, that’s down by 22% in the demo and down by 11% in viewership in the live+same day ratings (including DVR playback through 3:00 AM). While these numbers don’t include further delayed or streaming viewing, they are a very good indicator of how a show is performing, especially when compared to others on the same channel. There can be other economic factors involved in a show’s fate, but typically the higher-rated series are renewed and the lower-rated ones are cancelled. Find out how The Resident stacks up against other FOX TV shows.

Will FOX cancel or renew The Resident for season six? The show’s been a good performer for the network and FOX doesn’t have many other established scripted dramas so I think there’s a good chance that The Resident will be renewed. I’ll update this page with breaking developments. Subscribe for free alerts on The Resident cancellation or renewal news.

What do you think? Are you glad that The Resident TV show has been renewed for a sixth season? How would you feel if FOX cancelled this TV series, instead?

Please! Please! Please!!! Do not cancelled the Resident!!!! This is by far the best show I have seen in a long time. I am actually paying to be able to get this show. I was told about the show and just finished a multi-week marathon of watching it for several hours each day. I can’t get enough of it. I came in to this not knowing any of the actors, but now am totally hooked.
PLEASE RENEW THE RESIDENT!!!

Omg this show is one of the best.It must be renewed for a 6th season.Look forward to the show each week.

Please don’t cancel The Resident. I really look forward to this show every week.

Please don’t cancel this show. It’s one of the best on TV. We need it in our lives. Fans want to see Dr Austin becoming a dad, the love story between Conrad and Billie, more wonderful medical cases..I wish it continues for many seasons. I am from Spain.love this show

Being a retired Nurse and watching this entertaining program I have to cringe every time they put a patient in the E.R. and not close the curtain around them .All the actors are good. The storylines are interesting. But there are ‘holes’. When a Nurse leaves a patient at bedside she should be making sure the patient knows where the call bell is. Little Things. I’m nit picking. lol I really hope there will be a season 6. Dr. Pravesh keeps me tuning in. So glad to see Malcolm Jamal Warner in this series. Haven’t seen him since his Cosby… Read more »

i fell in love with this show, please keep it is one of the best tv shows

Why does Conrad Hawkins have a different last name than his father?

Please do not cancel the resident . This is one of my wife and I favorite shows