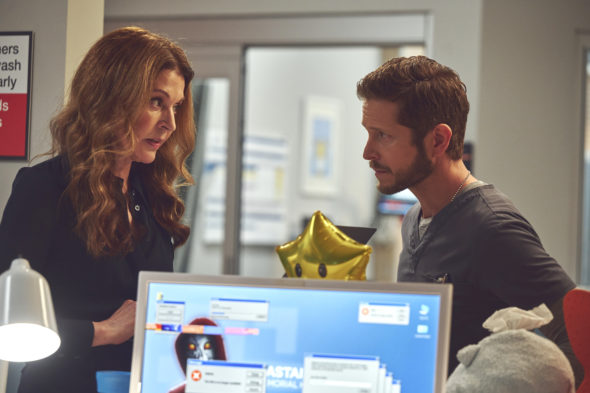 Chastain Memorial Hospital is staying open for the 2022-23 television season. The Resident has been renewed for a sixth season by FOX. The fifth season finale airs tomorrow night.

The fate of this show on the network came down to the wire and the series wasn’t included in FOX’s 2022-23 announcement. While the renewal of one of FOX’s established drama series would seem like a slam-dunk, decisions have become more complicated since the sale of the show’s studio, 20th Television, to Disney. With fewer people watching shows via traditional commercial-supported television, a network’s profits on shows produced by outside studios are a lot smaller than they used to be.

Check out our FOX status sheet to track the network’s new series pickups, renewals, and cancellations. You can find lists of cancelled shows here.
What do you think? Are you a fan of The Resident TV show? Are you glad to hear that FOX has renewed this drama series for a sixth season?

One of my favourites. Always has a dangerous side to it.

Best show on network television. The writing is incredible. Great cast. A+

We love this medical drama!! This is one of the shows we never miss ; the writers are excellent and the actors almost all play lovable and respectable roles, which is rare on tv. Keep it up for many more years!

I love the TV program the resident I’ve been watching it since I it came on. I’d be heartbroken if they took it off. I’m so glad you nude for another season and I’m looking so forward to the programming. And I hope it’ll be around for many years. That’s the only reason I watch Fox that includes 911 lone Star. I enjoyed leaving these comments.

Thank Hell it was renewed. The longer they delayed the announcements, the closer I was to sharpening my pitchforks and taking a trip up to Fox headquarters. I’m probably still going to have to visit CW as it is.

So happy my favorite show was renewed.