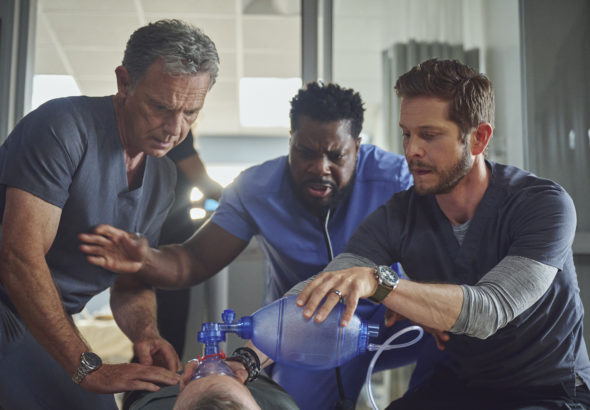 Are there big changes ahead for the fifth season of The Resident TV show on FOX? As we all know, the Nielsen ratings typically play a big role in determining whether a TV show like The Resident is cancelled or renewed for season six. Unfortunately, most of us do not live in Nielsen households. Because many viewers feel frustrated when their viewing habits and opinions aren’t considered, we invite you to rate all of the fifth season episodes of The Resident here. Status Update Below.

What do you think? Which season five episodes of The Resident TV series do you rate as wonderful, terrible, or somewhere between? Do you think that The Resident should be cancelled or renewed for a sixth season on FOX? Don’t forget to vote, and share your thoughts, below.

This is a great show. Each episode brings up real issues worth learning about. There’s no trash in it. Please continue the show.

Please renew! This my favorite show. It is excellent!

Hope it can succeed with Mina & Nic gone. Those 2 departing made it go from a decent show to a mundane show.

Have spent last few days hooked on the The Resident. Love it and all the characters. Great show, please renew!

The Resident is one of the best shows on TV and to even think about cancelling it is a crime! Even with Nic gone, the cast is outstanding, the topics relevant , and there’s so many stories to be told!

My husband and are really enjoying this series. We were both disappointed we have to wait so long to find out what is wrong with Bell! Years ago series ran 20+ episodes with reruns in the summer months. Why are there so few episodes in series today?

Even though Nic is not in the Resident anymore, it is still an excellant TV show. We will watch it always. This show should not be cancelled.
Lynda and Dianne

I agree with Michael Bowman…EXCELLENT