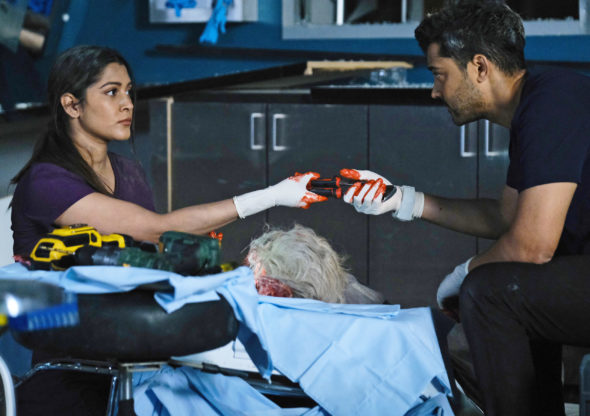 Viewers of The Resident will likely be seeing more of Dr. Leela Devi in the FOX show’s fifth season. Actress Anuja Joshi is being promoted to series regular for the upcoming 2021-22 season, per Deadline. Joshi recurred on the medical drama during season four, and the season finale featured a romantic moment between her and Dr. Devon Pravesh (Manish Dayal). The fifth season will further develop the pair’s relationship.

Matt Czuchry, Emily VanCamp, Bruce Greenwood, Malcolm-Jamal Warner, and Jane Leeves also star in the FOX medical drama. It was recently reported that series regular Morris Chestnut will recur next season due to him starring in the new FOX drama Our Kind Of People.

The Resident will return to FOX this fall, but a premiere date has not yet been set. The series will air at 8:00 PM on Tuesday nights, leading into Our Kind of People at 9:00 PM.

What do you think? Are you a fan of The Resident on FOX? Are you excited to see more of Joshi during season five?

So happy this was renewed! Thank you! Love this unique show and watching the bad characters transform into good ones! Mina was a great loss but the cast is so strong it will be successful regardless! Love the cast they are so amazing!

I love it glad it coming back on

Love this show! Can’t wait for the new season

Love the Resident & all the characters !!! Keep it Coming !!!

YAY!!! I am delighted that the Resident will be back!! Love the show and and all the characters.

Love The Resident! So glad for more seasons!

I love this show but losing Mina was so sad. I hope she at least does a guest spot now and then. Love the new doctor Anuja Joshi as well.

I love this show! So happy it will be back

The Rresident is my favourite medical show. YES…Mina should somehow return. It would be so great to have her back

The actress who plays Mina wanted to leave, but, they left the door open in case she wants to return someday.

Love this show but I want Mina back!!!! She was a huge part of the show.

If Mina does not return, I am no longer watching.