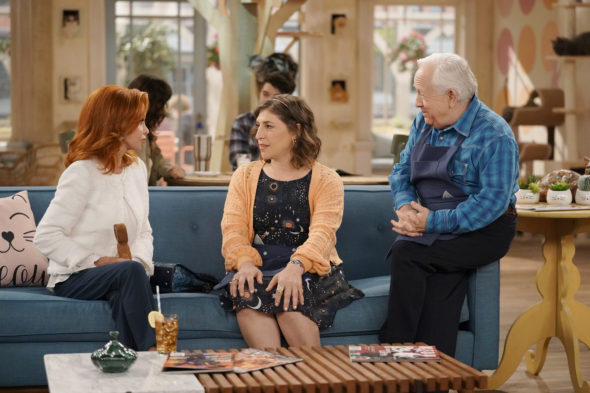 Kat and her friends (both furry and human) will be back for the 2022-23 TV season. Call Me Kat has been renewed for a third season on FOX. The second season finale aired on May 5th.

A multi-camera comedy series, the Call Me Kat TV show is based on the British Miranda series and stars Mayim Bialik, Swoosie Kurtz, Kyla Pratt, Cheyenne Jackson, Leslie Jordan, and Julian Gant. The story follows Kat (Bialik), a woman who struggles every day against society (and her mother) to prove that she can live a happy and fulfilling life — despite still being single at 39 years old. Kat’s mother, Sheila (Kurtz), views her daughter being single as her own personal failure. After leaving her job as a University of Louisville college professor, Kat spends the money her parents had set aside for her wedding to open a cat café. Working alongside Kat are her friends, artist Randi (Pratt) and Phil (Jordan), a baker. As Kat celebrates her independence, her single-forever plans begin to veer off-course when her former crush and good friend, Max (Jackson), returns to town. Max takes a job as a bartender at the piano bar across the street from Kat’s place and works with his friend, Carter (Gant).

Season three will air during the upcoming 2022-23 season but FOX has yet to announce its schedule for fall or mid-season.

What do you think? Have you enjoyed watching the Call Me Kat comedy series? Are you glad that it’s been renewed for a third season on FOX?

Thoroughly enjoy this show and am very glad it is returning. Too many shows are violent and depressing BUT this show is, for me, a HAPPY show and so a true pleasure to watch.

Like the show fresh and funny. Not a remake of an older show that have been done.

So the ratings are down even lower than season 1…… And they are still not killing the show??? Bialek is talented, but the show is lackluster, it’s storylines are subpar and it’s jokes stink. Just not funny. Terminate, please!

I enjoy how quirky the show is. It leaves me feeling joy when it ends.

Excellent news keep good comedy and shows are the best ones on there.