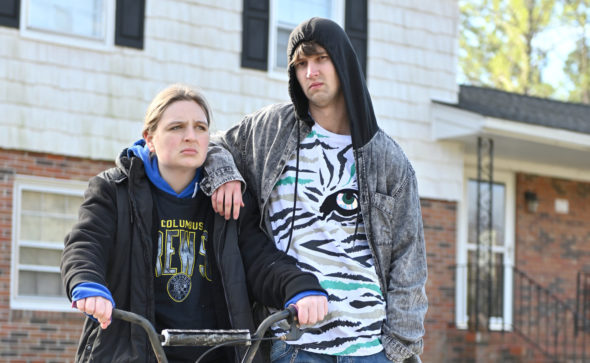 Kelly, Shrub, and the other residents of a certain small town are getting a second chance. FOX has renewed the low-rated  Welcome to Flatch TV series for a second season. The first season will conclude on May 26th.

A mockumentary comedy series from Jenny Bicks and Paul Feig, the Welcome to Flatch TV show stars Seann William Scott, Chelsea Holmes, Sam Straley, Taylor Ortega, Krystal Smith, Aya Cash, and Justin Linville. When a documentary crew sets out to explore the lives, dreams, and concerns of residents in a small American town, they stumble upon the midwestern town of Flatch. The community is made up of many eccentric personalities that include Joseph “Father Joe” Binghoffer (Scott), Kelly Mallet (Holmes), Lloyd “Shrub” Mallet (Straley), Nadine Garcia-Parney (Ortega), Mandy Matthews (Smith), Cheryl Peterson (Cash), and Mickey St. Jean (Linville). It’s a place you want to visit and maybe even stay — if there was a decent motel, which there is not.

Airing on Thursday nights, the first season of Welcome to Flatch averages a 0.18 rating in the 18-49 demographic and 796,000 viewers in the live+same day ratings (including DVR playback through 3:00 AM). In the live+7 day ratings, the season’s been averaging a 0.20 demo with 1.10 million.

The series is one of FOX’s lowest-rated shows but, given its style, appears less expensive to produce than other scripted series. According to Deadline, the Lionsgate studio worked to make a very attractive deal for FOX to renew the show. Michael Thorn, President of Entertainment at FOX, noted that the network sees great promise in the show.

What do you think? Have you checked out the Welcome to Flatch TV series on FOX? Are you glad that this comedy series has been renewed for a second season?

Love this show!! It’s hilarious! So happy you are renewing!

This is my favorite show ever!! It’s comforting and hilarious!! It seems reminiscent to “Parks and Recreation”, which was also great.

I think the show is genius. It’s hilarious if you have half a brain and can appreciate nuance. The skilled portrayal of the talented actors & great
writing & direction/production are not lost on me. It reminds me of a show that had a short life called Welcome to Sweden which I loved and wonder if there’s any connection ?

Welcome to Flatch is the second-worst comedy I’ve seen on TV. #1 was Mulaney. Tried to watch the unwatchable 2x. I’m convinced that no sober network executive watched it before it aired.

Amazing. Another money loser gets renewed.

seriously fox its the lowest rated show for a reason it sucks just cancel it.