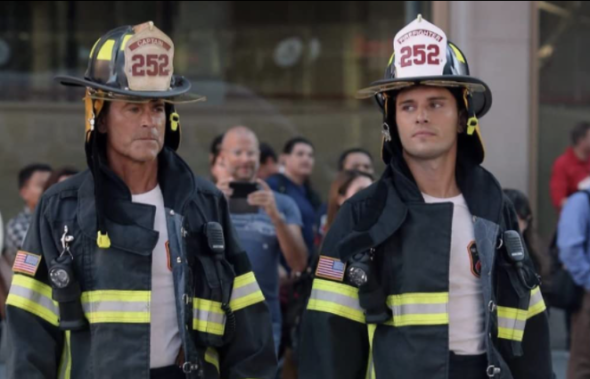 Captain Strand and his crew will be back for the 2022-23 television season. 9-1-1: Lone Star: has been renewed by FOX for a fourth season. The third season finale airs tonight.

Airing on Monday nights, the third season of 9-1-1: Lone Star averages a 0.62 rating in the 18-49 demographic and 4.84 million viewers in the live+same day ratings (includes all DVR playback through 3:00 AM). Compared to season two, that’s down by 28% in the demo and down by 11% in viewership. It ranks second in viewership among FOX’s other series from the current 2021-22 season.

While the renewal of one of FOX’s top-rated shows would seem like a slam-dunk, decisions have become more complicated since the sale of the show’s studio, 20th Television, to Disney. With fewer people watching shows via traditional commercial-supported television, a network’s profits on shows produced by outside studios are a lot smaller than they used to be. The fate of 9-1-1 has yet to be settled though it’s expected to be renewed and remain on FOX.

What do you think? Are you a fan of the 9-1-1: Lone Star series on FOX? Are you glad to know that it’s been renewed for a fourth season?

I am glad to know this series is renewed. It is most enjoyable if they leave much of the drama of characters out of it and stick to the disasters. It is about firefighters after all.

They need to ditch the paramedic captain (she bugs) and bring back Liv Tyler! Owen and Michelle would be a hot couple.