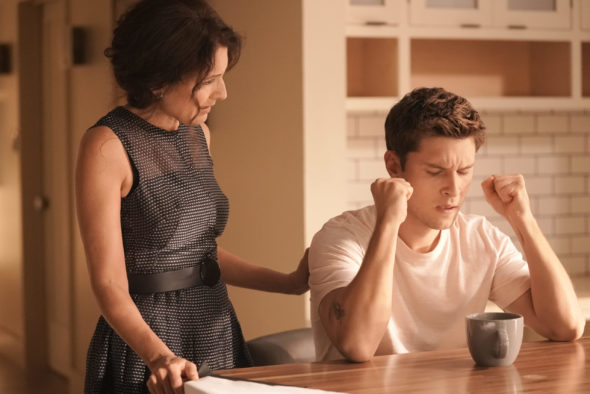 9-1-1: Lone Star viewers were shocked in the final moments of this week’s episode when T.K. (Ronen Rubinstein) received a call with bad news – his mother Gwyn had died. Lisa Edelstein played the character on the FOX series, and she returned earlier this season to help her son out of his coma and then to visit Austin for the reopening of the 126.

Series showrunner Tim Minear said the following about her exit from the FOX series, per Variety:

“Life is never one thing. And it’s relentless. I wanted Gwyn’s death to happen the way these sometimes do — out of the blue and without fanfare. It comes at a moment for TK when things are good. He and Carlos are at the next level. His fire family has been reunited. His mother’s death is a game changer for TK. But also for Owen and Carlos. The way TK deals with this loss and grief will tell us a lot about where he is and where he came from. And Owen will have his own reckoning with his past with Gwyn.”

On next week’s 9-1-1: Lone Star, viewers will see T.K. and Owen (Lowe) head to New York, but things will go horribly wrong during their flight.

What do you think? Were you shocked by the exit of Edelstein on the FOX series?

No. We weren’t shocked at all because she didn’t have many episodes. I assumed we wouldn’t see her again once she went back to have her baby.

I was surprised she was on this show to start with so not upset by her leaving. A House reboot would be great.

I absolutely loved House. I miss it. ☹️

Since she only appeared in a handful of episodes, it’s not really a “loss” for the show all that much. I’m guessing that Lisa got a better gig and was thus unavailable to make any further commitments to the 9-1-1 franchise?

With all the reboots of TV shows going on these days…. would it be too much for a Devil to hope for a “House” reboot??

I wish House came back. I loved loved that show