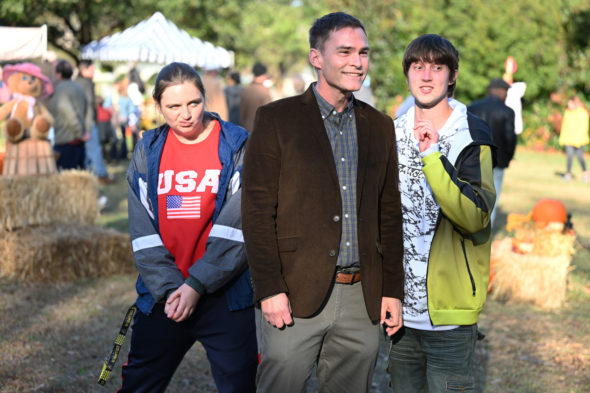 FOX’s other live-action comedies have struggled in the ratings this season. The network released most of the season’s episodes online ahead of their linear airings so it seems like FOX isn’t expecting much traction. Will Welcome to Flatch be a surprise hit and be renewed for season two, or, will it be cancelled instead? Stay tuned. Status Update Below.

A mockumentary comedy series, the Welcome to Flatch TV show stars Seann William Scott, Chelsea Holmes, Sam Straley, Taylor Ortega, Krystal Smith, Aya Cash, and Justin Linville. When a documentary crew sets out to explore the lives, dreams, and concerns of residents in a small American town, they stumble upon the midwestern town of Flatch. The community is made up of many eccentric personalities that include Joseph “Father Joe” Binghoffer (Scott), Kelly Mallet (Holmes), Lloyd “Shrub” Mallet (Straley), Nadine Garcia-Parney (Ortega), Mandy Matthews (Smith), Cheryl Peterson (Cash), and Mickey St. Jean (Linville). It’s a place you want to visit and maybe even stay — if there was a decent motel, which there is not.

What do you think? Do you like the Welcome to Flatch TV series on FOX? Should it be cancelled or renewed for a second season?

This show gets better every week Love the characters!

Those ratings are beyond putrid.

I grew up in a small town. Welcome to Flatch was funny and relatable. The characters grow on you. I hope it doesn’t get canceled because I want to see how some plot lines turn out.

Tried to watch the whole first episode. Just couldn’t get through it. Unfunny. Bizarre. Awful.