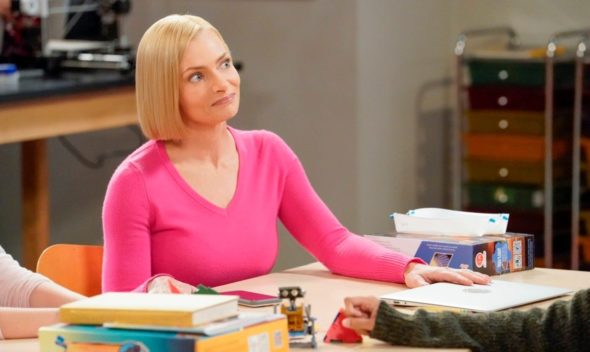 Welcome to Flatch is adding to its cast for a second season. Jaime Pressly (Mom, above) will join the FOX sinle-camera comedy as “Barb Flatch, a realtor who returns to her hometown after a bad divorce. She believes in second chances and wants to give Flatch the glow up it deserves, one margarita at a time.” per Variety.

Welcome to Flatch debuted in March of this year and stars Seann William Scott, Chelsea Holmes, Sam Straley, Taylor Ortega, Krystal Smith, Aya Cash, and Justin Linvill. When a documentary crew sets out to explore the lives, dreams, and concerns of residents in a small American town, they stumble upon the midwestern town of Flatch. The community is made up of many eccentric personalities.

Airing on Thursday nights, the first season of Welcome to Flatch drew low ratings but was able to land a second season renewal anyway. Why? Lionsgate studio worked to make a very attractive deal for FOX to renew the show. Michael Thorn, President of Entertainment at FOX, noted that the network sees great promise in the show.

Welcome to Flatch returns to FOX on September 29.

What do you think? Are you excited to see Pressly join this FOX comedy?

I’m astounded that this bizarre and unfunny show was given a second season. Dismal ratings — dismal!