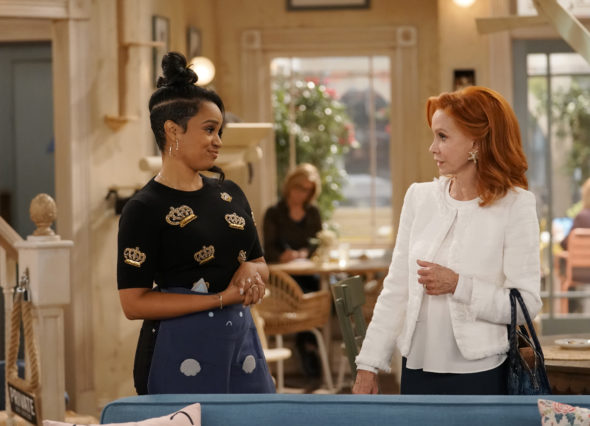 Can Kat live up to her mom’s expectations in the second season of the Call Me Kat TV show on FOX? As we all know, the Nielsen ratings typically play a big role in determining whether a TV show like Call Me Kat is cancelled or renewed for season three. Unfortunately, most of us do not live in Nielsen households. Because many viewers feel frustrated when their viewing habits and opinions aren’t considered, we invite you to rate all of the second season episodes of Call Me Kat here. *Status Update Below.

A FOX multi-camera comedy series, the Call Me Kat TV show is based on the British Miranda series and stars Mayim Bialik, Swoosie Kurtz, Kyla Pratt, Cheyenne Jackson, Leslie Jordan, and Julian Gant. The story follows Kat (Bialik), a woman who struggles every day against society (and her mother) to prove that she can live a happy and fulfilling life — despite still being single at 39 years old. Kat’s mother, Sheila (Kurtz), views her daughter being single as her own personal failure. After leaving her job as a University of Louisville college professor, Kat spends the money her parents had set aside for her wedding to open a cat café. Working alongside Kat are her friends, artist Randi (Pratt) and Phil (Jordan), a baker. As Kat celebrates her independence, her single-forever plans begin to veer off-course when her former crush and good friend, Max (Jackson), returns to town. Max takes a job as a bartender at the piano bar across the street from Kat’s place and works with his friend, Carter (Gant).

What do you think? Which season two episodes of the Call Me Kat TV series do you rate as wonderful, terrible, or somewhere between? Do you think that Call Me Kat should be cancelled or renewed for a third season on FOX? Don’t forget to vote, and share your thoughts, below.

Please keep this show. Love it. Love the waving at end of show.

Save this show. My whole family loves it. Pure, joyous, lighthearted entertainment. ♥️
The ending is fun too – the silly dancing !

Love this show. It’s fun. Love the end with the dancing.

Love this show! The dancing at the end (particularly in Season 1) was what hooked me. The show always leaves me feeling happy even after they tackle some real life issues. The cast always works well together and seems to enjoy the time they spend together. It’s not dumb, on the stupid side or constantly cursing like so many shows these days, and we definitely need to see Kat finally hook up with Max. ❤️

I love this show and hope there is a season 3

Call Me Kat, is a different kind of funny, comedy, but if the writers would lay off the sexually innuendos, this show would merit a 10 stars. Gotta wonder if anyone reads these….

Please ,Please,Renew Tough Love for season 2 with Hillary Farr she’s so talent and amazing at stuff what she does mind blowing