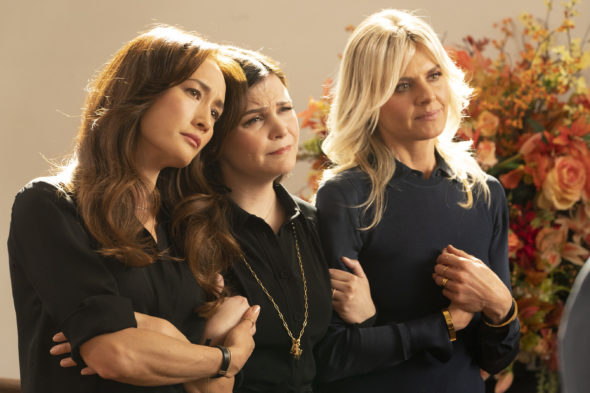 Are these changes a good thing in the first season of the Pivoting TV show on FOX? As we all know, the Nielsen ratings typically play a big role in determining whether a TV show like Pivoting is cancelled or renewed for season two. Unfortunately, most of us do not live in Nielsen households. Because many viewers feel frustrated when their viewing habits and opinions aren’t considered, we invite you to rate all of the first season episodes of Pivoting here. *Status Update Below.

A FOX single-camera comedy series, the Pivoting TV show stars Eliza Coupe, Ginnifer Goodwin, Maggie Q, Tommy Dewey, JT Neal, and Marcello Reyes. Set in a small, middle-class Long Island town, the story follows three women who’ve been best friends since childhood. They’re coping with the death of the fourth member of their group. When faced with the reality that life is short, these three ladies decide to pivot. Amy (Coupe) is the fearless producer of a local cooking show who decides to become a better parent to her kids and spouse to her husband (Dewey). Jodie (Goodwin) is a stay-at-home mom of three in a loveless marriage who decides to get in shape with her hot 27-year-old trainer (Neal). Meanwhile, Sarah (Q) is a stressed and recently divorced doctor who wants to simplify her life so she begins working as a grocery store employee. For all three of these women, the untimely and heartbreaking death of their friend serves as the wake-up call they didn’t know they needed.

What do you think? Which season one episodes of the Pivoting TV series do you rate as wonderful, terrible, or somewhere between? Do you think that Pivoting should be cancelled or renewed for a second season on FOX? Don’t forget to vote, and share your thoughts, below.

*5/14/22 update: Pivoting has been cancelled on FOX so there won’t be a second season.

h I hope Pivoting is renewed./ I loved it.