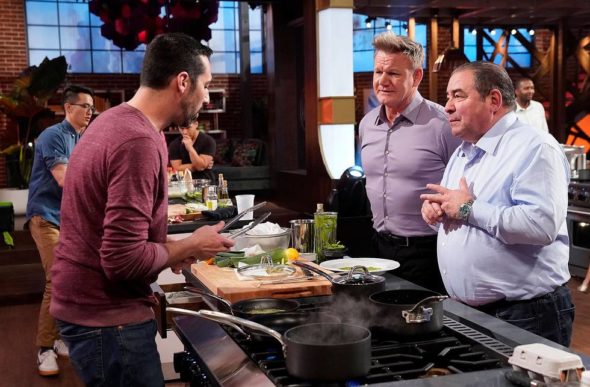 Things will keep heating up in the FOX kitchen. The network has renewed the MasterChef TV series for a 12th season. Season 11 is expected to finish airing on September 15th

A cooking competition, the MasterChef TV show features award-winning chef Gordon Ramsay, acclaimed chef Aarón Sánchez, and renowned restaurateur Joe Bastianich as they judge the work of culinary competitors alongside iconic kitchen legends like Emeril Lagasse, Paula Deen, Roy Choi, Nancy Silverton, and Morimoto. For the first time, only 15 of the best home cooks in America will receive the coveted white apron and impress four legends with all new challenges, including the toughest yet — a head-to-head battle with Ramsay. Only one home cook will ultimately claim the Masterchef title, the $250,000 grand prize, a complete Viking kitchen, and kitchen tools and bakeware products from OXO.

The 11th season of MasterChef averages a 0.59 rating in the 18-49 demographic and 2.60 million viewers. Compared to season 10, that’s down by 22% in the demo and down by 15% in viewership in the live+same day ratings (including DVR playback through 3:00 AM). While these numbers don’t include further delayed or streaming viewing, they are a very good indicator of how a show is performing, especially when compared to others on the same channel. There can be other economic factors involved in a show’s fate, but typically the higher-rated series are renewed and the lower-rated ones are cancelled.

“Obviously, Gordon is a good friend and, given the recent launch of Studio Ramsay Global, an important part of FOX’s programming and growth strategy,” said Rob Wade, President of Alternative Entertainment and Specials, FOX Entertainment. “MASTERCHEF, Gordon, Aarón and Joe, and our fantastic partners at ESNA, have been vital to FOX’s DNA. Even in its eleventh season, this show continues to impress by sustaining FOX’s success on Wednesdays this Summer. We anticipate this momentum to continue next year when MASTERCHEF returns for a much deserved Season 12.”

MASTERCHEF currently averages 5.0 million multi-platform viewers. Its telecasts this season, together with CRIME SCENE KITCHEN, have led FOX to rank as the #1 broadcast network on six of this Summer’s eight Wednesdays that the pair aired together.

On the next all-new episode of MASTERCHEF: LEGENDS, airing tonight Wednesday, Aug. 18 (8:00-9:00 PM ET/PT) on FOX, Chef Ramsay challenges the home cooks to create a dish for the most important legend yet – their own personal legends. Their personal legends could be someone they look up to, a personal hero, or even a family member who inspires them. Throughout this season, legendary chefs continue to join as a guest judges, alongside Ramsay, Sánchez and Bastianich. Upcoming legends include Dominique Crenn, Niki Nakayama and more. As the competition advances toward the finale, only one home cook will ultimately claim the MASTERCHEF title, the $250,000 grand prize, a complete VIKING kitchen and kitchen tools and bakeware products from OXO.

About Gordon Ramsay/Studio Ramsay Global
Renowned for highly successful and award-winning original programming, Emmy-nominated and BAFTA-winning Gordon Ramsay produces TV shows on both sides of the Atlantic, seen by audiences worldwide in more than 200 territories, and he is the only talent on air in the U.S. with four prime-time national network shows. He hosts and executive-produces HELL’S KITCHEN, MASTERCHEF, MASTERCHEF JUNIOR and GORDON RAMSAY’S 24 HOURS TO HELL AND BACK, in addition to specials, including 2021’s “Gordon Ramsay’s American Road Trip.” Ramsay and Fox Entertainment recently announced their leading new worldwide production venture Studio Ramsay Global to develop, produce and distribute culinary and lifestyle programming for FOX, Tubi and global markets. His earlier multimedia production company Studio Ramsay was launched in the U.K. in 2016 to create and develop unscripted, digital and scripted programming, focusing on new formats and innovative programming, as well as fostering new talent. Its shows include GORDON RAMSAY’S 24 HOURS TO HELL AND BACK, which was the highest-rated food show of 2019; “The F-Word Live With Gordon Ramsay”; “Gordon Ramsay: Uncharted,” on National Geographic Channel, which airs in 172 countries and 43 languages worldwide; the ratings hit and BAFTA-nominated “Gordon, Gino and Fred’s Road Trip,” for ITV; “Gordon Ramsay’s Bank Balance,” on BBC1; the daytime cooking series “Culinary Genius,” which premiered on ITV in the U.K., and was syndicated on FOX stations in the U.S.; the ITV series “The Savoy” and “Gordon on Cocaine”; and the highly popular children’s series “Matilda and the Ramsay Bunch,” starring Tilly Ramsay for U.K. children’s channel CBBC. Studio Ramsay Global Digital Division is behind all of Ramsay’s original content on his highly successful YouTube Channel, which has made Ramsay the most subscribed chef on the platform. The 18-34 dominated channel launched the trending interview series “Scrambled,” and is also behind the highly successful “Ramsay in 10,” which went live during the global COVID-19 pandemic and returns this fall. Studio Ramsay Global Digital oversees and creates content for all behind-the-scenes moments from Studio Ramsay linear programming, has produced content for National Geographic and Masterclass, and produces recipe content across Gordon’s 80 million plus Social Media reach, including his breakout TikTok account.

Check out our FOX status sheet to track the network’s new series pickups, renewals, and cancellations. You can find lists of cancelled shows here.
What do you think? Do you look forward to watching the MasterChef TV series each year on FOX? Are you glad that this series has been renewed for a 12th season?

Yes. And master chef Juniorand Hell’s Kitchen. Have followed Gordon since the 70s.

I LOVE this show and Masterchef Junior as well!!