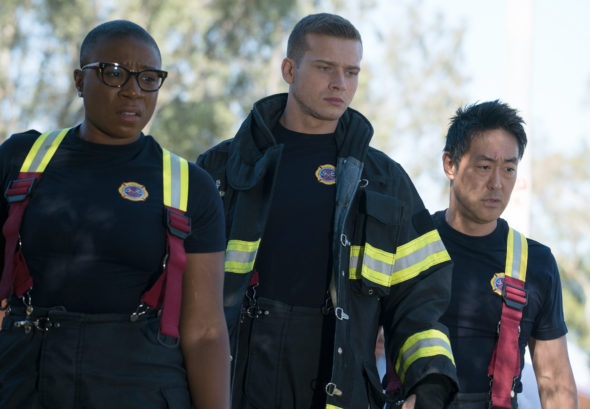 How are LA’s finest holding up during the second season of the 9-1-1 TV show on FOX? As we all know, the Nielsen ratings typically play a big role in determining whether a TV show like 9-1-1 is cancelled or renewed for season three. Unfortunately, most of us do not live in Nielsen households. Because many viewers feel frustration when their viewing habits and opinions aren’t considered, we’d like to offer you the chance to rate all of the 9-1-1 season two episodes here. *Status update below.

A FOX procedural, 9-1-1 stars Angela Bassett, Peter Krause, Jennifer Love-Hewitt, Oliver Stark, Aisha Hinds, Kenneth Choi, Rockmond Dunbar, Ryan Guzman, Corinne Massiah, and Marcanthonee Reis. The scripted drama, inspired by real-life experiences, centers on the police officers, firefighters, and paramedics who risk their lives to save others. No matter how frightening, dangerous, and shocking a situation may be, these first responders rush toward crises from which others flee.

What do you think? Which season two episodes of the 9-1-1 TV series do you rate as wonderful, terrible, or somewhere between? Should FOX cancel or renew 9-1-1 for a third season? Don’t forget to vote, and share your thoughts, below.

OMG, where is my show? I thought maybe because of the holidays you guys were taking a break. But now the holidays are over. Please bring it back

9-1-1 is my families favorite show. We are hoping it has many, many year ahead . you really can’t run out of ideas. Please keep the show on the air. I do not want some Nielson homes deciding what all of us watch. Everyone i know loves this show.

This is the best show on TV! My Husband was a EMT I for 23 years, and I worked in the Nursing Field for 18 years, so this show brings back memories! Never candy coated, it shows things as they really are, dirty, gritty, bloody, and deeply fulfilling and joyous. I hope this show lasts like, Gunsmoke, Married With Children, and Star Trek, 911 is a keeper!!

This is an awesome show. I’m so glad it will be coming back on. I can’t wait. Thank you