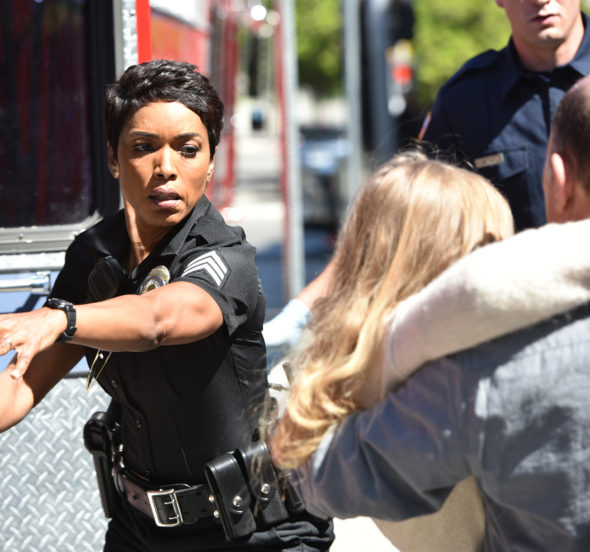 Do the first responders get the job done during the first season of the 9-1-1 TV show on FOX? As we all know, the Nielsen ratings typically play a big role in determining whether a TV show like 9-1-1 is cancelled or renewed for season two. Unfortunately, most of us do not live in Nielsen households. Because many viewers feel frustration when their viewing habits and opinions aren’t considered, we’d like to offer you the chance to rate all of the 9-1-1 season one episodes here.

A FOX procedural, 9-1-1 stars Angela Bassett, Connie Britton, Peter Krause, Oliver Stark, Aisha Hinds, Kenneth Choi, and Rockmond Dunbar. The scripted drama, inspired by real-life experiences, centers on the police officers, firefighters, and paramedics who risk their lives to save others. No matter how frightening, dangerous, and shocking a situation may be, these first responders rush toward crises from which others flee.

What do you think? Which season one episodes of the 9-1-1 TV series do you rate as wonderful, terrible, or somewhere between? Should FOX cancel or renew 9-1-1 for a second season? Don’t forget to vote, and share your thoughts, below.

911 has had some gross programs-some interesting some not-I did not like Oct 21 -too much anger-in the past 911 helped police -not this one-my Husband retired fire fighter said yes-there are bad cops but not as many as the TV portrays-that’s why so many young stupid kids won’t obey when stopped and challenge the police-then The situation then is who gets killed or hurt? Please help our Police and stop showing bad Cops-this is making them all jumpy and it will get worse-so many killed just doing their job

Don’t really care if this one gets cancelled. Doesn’t keep my interest.

Want it to continue. Will be interested in the direction the show goes in.

Thank u. Good show. Keep it going. Love it

This series 911 is the best in storyline and actors.
Please keep this series going. The blend of characters and best yet in a stressful lifestyle. Hits home.

I love this show. My son told be about it. I had to catch up. No problem! Some days I watched 3 episodes. When the season ended, I hoped it was coming back soon. Keep up the great work with the story lines.

I find this series very true to life. The stories and characters are wonderful.

I had a short time as a 911 Operator and this show really digs deep in the daily scenarios that happens in real life. Of course, some things are far from reality, but that’s what entertainment does. This show keeps you on the edge of your seat and it is a great way to relieve yourself from reality tv.

Love this show very much!!!

Great show. Look forward to it every week. It’s not like all of the other medical or cop shows on tv. That’s what makes it so interesting. In real life first responders do have real lives, things happen to them too. It makes it so much more believable when everything is not just perfect. Hope it stays on a long time.