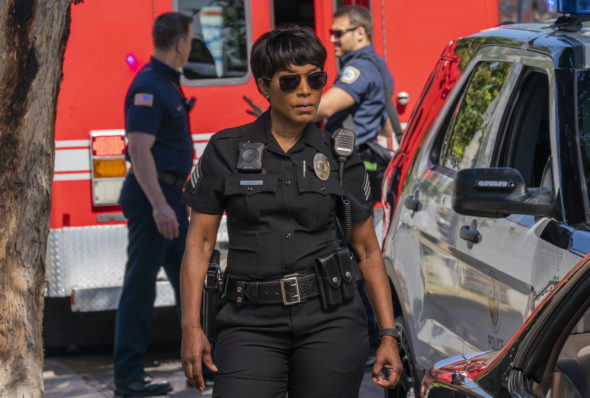 Is it “urgent” for you to watch the third season of the 9-1-1 TV show on FOX? As we all know, the Nielsen ratings typically play a big role in determining whether a TV show like 9-1-1 is cancelled or renewed for season four. Unfortunately, most of us do not live in Nielsen households. Because many viewers feel frustration when their viewing habits and opinions aren’t considered, we’d like to offer you the chance to rate all of the season three episodes of 9-1-1 here. *Status Update Below.

A FOX procedural, 9-1-1 stars Angela Bassett, Peter Krause, Jennifer Love Hewitt, Oliver Stark, Kenneth Choi, Aisha Hinds, Rockmond Dunbar, Ryan Guzman, Corinne Massiah, and Marcanthonee Jon Reis. A scripted drama that’s been inspired by real-life experiences, this show centers on the police officers, firefighters, and paramedics who risk their lives to save others. No matter how frightening, dangerous, and shocking a situation may be, these first responders rush toward disasters while others are running for cover.

What do you think? Which season three episodes of the 9-1-1 TV series do you rate as wonderful, terrible, or somewhere between? Should FOX cancel or renew 9-1-1 for a fourth season? Don’t forget to vote, and share your thoughts, below.

Why did Fox not release Seasons 2 and 3 of 9-1-1 on to DVD’s? They released the Season 1 and then just stopped. I don’t understand. It is a top rated show, so where’s my DVD’s? I know most people use that streaming mess—NOT me. I want a physical disc that I can put in my DVD players and watch on a TV and not on a computer or a cell phone. That’s the reason I have 2 large screen TV’s in my house!

Please Keep this show ‘911’. It is wonderful! Love all of the cast and they all work well together. ~ Peace, Marc

I love both 911 series. I’ve been watching since day one. They are the best. I hope they get renewed. Love all the characters.