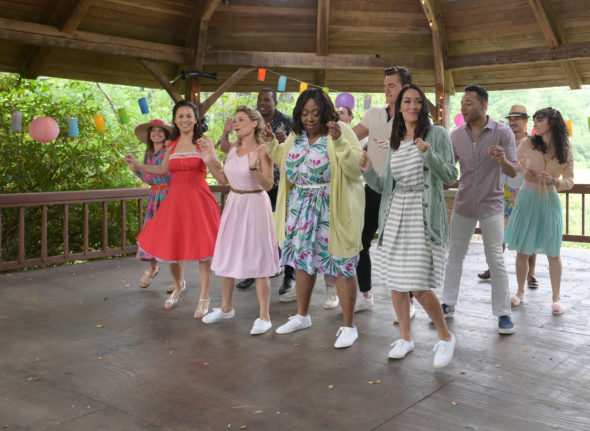 A FOX competition series, The Real Dirty Dancing TV show is hosted by Stephen “tWitch” Boss. The competitors are Brie Bella, Corbin Bleu, Tyler Cameron, Cat Cora, Howie Dorough, Antonio Gates, Anjelah Johnson-Reyes, and Loni Love. The program follows celebrities as they fully immerse themselves in the ultimate Dirty Dancing experience. Set at Virginia’s Mountain Lake Lodge — the real location for the film’s fictional Kellerman’s Lodge — the stars partner up and learn iconic dance routines from the movie and recreate classic scenes using memorable music and fashion. Episodes also feature special guest judges who help decide which celebrity couples will move further in the competition and, which couple will be “put in a corner.” In the end, one man and one woman will be crowned the winning “Baby” and “Johnny” and become The Real Dirty Dancing champions.

My sisters and I are in our sixties, but we love this show.We didn’t miss an episode and couldn’t wait for tuesday night to see the next episode. Please bring it back with new couples.

Angela n Tyler were much better at the final dance. But seemed like people liked them better. Won’t watch it again but was ok

Please bring back another season!! Love this show!!

I’m thoroughly enjoying the show! Please bring back another season! 5 star rating from me ❤

I’m afraid I have to disagree with Bree Bella and her partner to be eliminated I believe they were better then the first couple to dance.