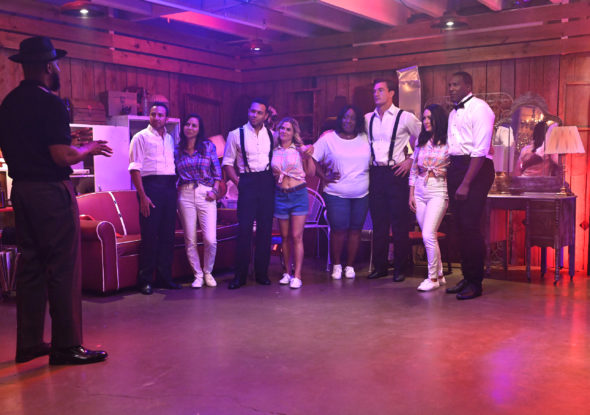 Should this series be put in a corner permanently? Has The Real Dirty Dancing TV show been cancelled or renewed for a second season on FOX? The television vulture is watching all the latest cancellation and renewal news, so this page is the place to track the status of The Real Dirty Dancing, season two. Bookmark it, or subscribe for the latest updates. Remember, the television vulture is watching your shows. Are you?

Airing on the FOX television network, The Real Dirty Dancing TV show is hosted by Stephen “tWitch” Boss. The competitors are Brie Bella, Corbin Bleu, Tyler Cameron, Cat Cora, Howie Dorough, Antonio Gates, Anjelah Johnson-Reyes, and Loni Love. The series follows celebrities as they fully immerse themselves in the ultimate Dirty Dancing experience. Set at Virginia’s Mountain Lake Lodge — the actual location for the film’s fictional Kellerman’s Lodge — the stars partner up and learn iconic dance routines from the movie and recreate classic scenes using memorable music and fashion. Episodes also feature special guest judges who help decide which celebrity couples will move further in the competition and which pair will be “put in a corner.” In the end, one man and one woman will be crowned the winning “Baby” and “Johnny” and become The Real Dirty Dancing champions.

The first season of The Real Dirty Dancing averages a 0.22 rating in the 18-49 demographic and 1.48 million viewers in the live+same day ratings (including DVR playback through 3:00 AM). While these numbers don’t include further delayed or streaming viewing, they are a very good indicator of how a show is performing, especially when compared to others on the same channel. There can be other economic factors involved in a show’s fate, but typically the higher-rated series are renewed and the lower-rated ones are cancelled. Find out how The Real Dirty Dancing stacks up against other FOX TV shows.

Will FOX cancel or renew The Real Dirty Dancing for season two? The network is promoting this as a “special event” and it truly feels like a one-season series. The ratings aren’t very good, so I would be surprised if it were to be renewed. I think it’s more likely that the network could order another competition based on another beloved movie. I’ll update this page with breaking developments. Subscribe for free alerts on The Real Dirty Dancing cancellation or renewal news.

What do you think? Do you hope that The Real Dirty Dancing TV show will be renewed for a second season? How would you feel if FOX cancelled this TV series instead?

Oh my god they need a second season I haven’t laughed so hard for a long time
Please don’t cancel !!! Have another season !!!! Pleeeeeeaase !!!
Thankyou xx

I would like to see more seasons of The Real Dirty Dancing Although this group of competitors did a good job there are still lots who would like to be Baby and Johnny.The fan base is huge for this movie and there are so many who want to keep Swayze remembered. This time it would be nice if you could get Jennifer Grey to show up for the finale. Twitch is doing a wonderful job and more ideas can be developed to keep this series. I binge watched it and how about more than four couples this time and ps… Read more »

the real dirty dancing brought. back memories from the original movie that were very pleasant
to watch and I would enjoy seeing more and the competitors really seemed to enjoy it so it was fun to watch and we need more happiness in these tough times it was a pleasure to watch and I’m looking forward to more

Please have many more seasons of the real dirty dance. It my favorite movie. I really enjoy the first season. See if you can get Jennifer grey on there as baby. That would be awesome and many people will watch it.

Please have a season 2!

I enjoyed this show so much!! Yes, please have a season 2!!

Omg it better have a second season