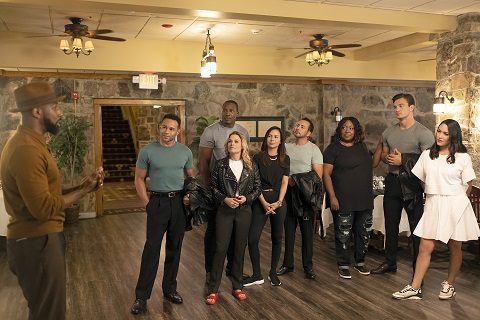 “FOX celebrates one of the most iconic movies of all time with the new celebrity dance competition THE REAL DIRTY DANCING. Hosted by Stephen “tWitch” Boss, this one-of-a-kind competition features celebrities reliving the classic film’s most memorable dance moments in the hope of becoming the next “Baby” and “Johnny.” The special event series is set to air Tuesdays, on Feb. 1, Feb. 8, Feb. 15 and Feb. 22 (9:00-10:00 PM ET/PT) on FOX.

The series follows eight celebrities – Brie Bella, Corbin Bleu, Tyler Cameron, Cat Cora, Howie Dorough, Antonio Gates, Anjelah Johnson-Reyes and Loni Love – as they fully immerse themselves in the ultimate Dirty Dancing experience. Set at Virginia’s Mountain Lake Lodge, which was the real location for the film’s fictional Kellerman’s Lodge, the stars will partner up and learn iconic dance routines from the Jennifer Grey-and Patrick Swayze-led movie and recreate classic scenes – including the legendary lift that cemented the film’s spot in cinematic history. Throughout the event special, Dirty Dancing’s memorable music and unforgettable fashion will transport viewers right back to that magical summer in 1963. The competition will also feature special guest judges who will help decide which celebrity couples will make it through and which couple will be “put in a corner.” In the end, one man and one woman will be crowned the winning “Baby” and “Johnny,” becoming THE REAL DIRTY DANCING champions. After their linear telecasts, all episodes of THE REAL DIRTY DANCING will be available on FOX’s free streaming platform, Tubi.”

What do you think? Do you plan to check out The Real Dirty Dancing on FOX next month?

We need another reality show like this? Even though I like dancing but this is just stupid

Huge pass. They should have put this idea in a corner. I get that reference, and I haven’t seen the movie btw.