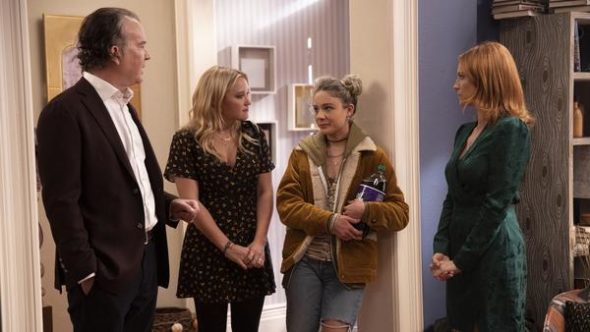 It appears that FOX is finished with the network’s current Wednesday night series — Almost Family and Flirty Dancing. While the shows haven’t been officially cancelled (few shows are), their ratings have been very low and now, both series are being pulled from the schedule.

A scripted drama, Almost Family stars Brittany Snow, Tim Hutton, Megalyn Echikunwoke, Emily Osment, Mo McRae, Mustafa Elzein, and Victoria Cartagena. In the series, Julia Bechley (Snow) is an adult only child who has her world turned upside down. She learns that her father, Doctor Leon Benchley (Hutton), a pioneer in fertility, secretly used his own sperm to father over a hundred children. While still reeling from this revelation, Julia discovers that she has two new half-sisters — her former best friend, Edie Palmer (Echikunwoke), and ex-Olympic athlete Roxy Doyle (Osment).

A dating series, Flirty Dancing is hosted by actress and dancer Jenna Dewan. In the show, complete strangers are each taught half of a dance routine. They then meet for the first time on a blind date at a breathtaking location, where they dance together without saying a word. Will there be an unspoken connection and chemistry?

Almost Family launched in October 2019 while Flirty Dancing just began airing in late December. Both have struggled in the ratings. Almost Family’s been averaging a 0.49 rating in the 18-49 demographic with 1.71 million viewers. The most recent installment drew a 0.30 in the demo with just over a million viewers. Meanwhile, Flirty Dancing debuted on a Sunday night and received a nice ratings boost from the preceding NFL game. The ratings saw a big tumble in subsequent episodes however and this week’s installment drew a 0.30 demo with 1.38 million.

FOX has decided to pull both programs after next Wednesday’s episodes. On January 22nd, they’ll be replaced by a rerun of the two-hour premiere of new drama 9-1-1: Lone Star (it launches January 19th). On January 29th, FOX will fill the timeslots with reruns of Gordon Ramsay’s 24 Hours to Hell and Back, Last Man Standing, and new sitcom Outmatched (it debuts January 23rd).

The network will wrap up Flirty Dancing with the final two episodes of the season (or series) airing on Saturday, January 25th. Here’s the description:

WILL IT BE LOVE AT FIRST DANCE? ON THE ALL-NEW TWO-HOUR SEASON FINALE OF “FLIRTY DANCING” SATURDAY, JANUARY 25, ON FOX
Hosted by Jenna Dewan, FLIRTY DANCING is the innovative new series that is part performance, part blind date, and all about chemistry. In this romantic approach to dating, eligible singles will push themselves out of their comfort zones in the hope of being swept off their feet, rather than swept to the left or right on a phone. Two singles will perform a different choreographed dance with each of two potential love interests, before choosing the one with whom he/she has the strongest connection in the all-new “Episode 5: Alex & Navi / Episode 6: Khairi & Ashlee” two-hour season finale episode of FLIRTY DANCING airing Saturday, Jan. 25 (8:00-10:00 PM ET/PT) on FOX. (FLD-105/FLD-106) (TV-PG D, L)

Fans of Almost Family will have to wait even longer for the season (likely series) finale episodes of that show. FOX won’t be airing the two episodes until Saturday, February 22nd.

What do you think? Have you been watching either Almost Family or Flirty Dancing on FOX? Do you think that they should be pulled and/or cancelled? Would you have watched a second season of either of them?

I LOVED LOVED LOVED Flirty Dancing and was hoping so much it would be coming back on! ❤️ Please bring it back…oh did I mention I loved it? lol

Almost. Family dragged at times but do admit I would continue to watch it if not cancelled as it had good moments.

I don’t personally think flirty dancing should be renewed. It was cute the first couple of episodes, but found that to be enough.

Really sad to hear the delightful FLIRTY DANCING was cancelled. For this permanently disabled die-hard romantic, I came to it too late I guess (didn’t know it even existed ’til I stumbled upon it), but LOVED it. What a sorry shame to enjoy it so much and then it to be suddenly over. PLEASE, bring it back.

I saw the show just couple times and I was hooked. I’m a 56 yrs old and believe in love at first glance. That show my me believe again in good things can happen in this crazy world. Please don’t cancel it. It a wonderful show and need more shows like this

I absolutely would watch Flirty Dancing! I love the show and get all the feels when I watch it. Please come back!

I love flirty dancing and have numerous people who agree! Far better than dancing with the stars! We were hooked from the first episode! Best show on Fox! Please don’t cancel it! Heartbroken! Give it another chance please!!!!!!

I LOVE flirty dancing! Best show ever! Don’t cancel it! Beats the bachelor hands down! I’m not alone… there’s a lot of people who will watch! Beats dancing with the stars hands down!!!! Bring it back PLEASE

I love Flirty Dancing.!!!!!!!The moves, the chemistry, the song choice, the backdrop & Jenna was Fabulous. I love that they weren’t professional dancers & they killed it! I really enjoyed the dance routine….It’s a nice way to meet the “one.” I don’t think that FOX network gave it a chance ☹️PLEASE BRING IT BACK!!!!

I love Flirty Dancing!!!! It’s such a great show…the dance moves, the chemistry, the backdrop & Jenna was Fabulous. I really love that they weren’t professional dancers…and they killed it! I don’t think FOX network gave it a chance. SHAME ON THEM ☹️…..PLEASE BRING IT BACK!

I watched both shows and have been patiently waiting for flirty dancing seconds season,it will be sad to see them cancel them both

Please do not cancel Flirty Dancing this show is really a great show. It’s upbeat, fun, sexy, and most importantly happy and we really need something to make us smile right now . We need to believe in happy endings and this show is just a feel good show. Jenna Dewan is helping to put smiles on America right now let’s keep that going.

I’m broken hearted that Flirty Dancing was cut. Great show! Gave a little hope back to this crazy world! So bummed

I’m so upset that Flirty Dancing was cancelled. What a great show! It was a little hope in this crazy world! I watched every episode and I’m broken hearted that it was cut. Please come back!